Tonight we hear the truth behind the nocturnal defanging that has been plaguing one Capital City neighbourhood.

Capital City wasn’t what it used to be. There’d been a time when Lethe Park had been family sitcom set material, but Mulligan knew he was likely sitting on the exact same bench he’d occupied thirty years back. He shifted in an attempt to find some comfort on the rotting boards, and as he spoke his sneakered toes pushed the husk of a long-emptied dime bag in slow circles.

Dr. Ruth Hill, her brown hair in a short ponytail and her hands knit together on a simple black skirt, made no effort to interject. Her posture was as rigid as the lines of her thick-rimmed glasses, and her eyes were focused on the teens smoking on the nearby play structure.

“It was the mention of stitches – well, the stitches and Sarah’s daughter’s perfect smile,” continued Smith. “Gave me a suspicion, you know. I’d talked to a few people who’d had their pearly-whites purloined, but there was something about the alignment of similarities with Jimmie Hobbs and his family; a strange lack of memory.

“Looking for a clearer view on things I tracked down Jimmie’s wife. Jenny is an interesting woman. She looks a bit like she stepped out of a depression-era photo, which makes it surprising when you find out she laughs at the drop of a pun. I haven’t felt funnier in years.

“You can see her braces when she howls. She works a factory job, but I guess they’ve got a good union. Excellent health benefits and all that, right?”

Mulligan leaned forward, kicking the tiny plastic sack into the yellow grass, then he buried his fingers in his shaggy salt-and-pepper beard.

“You know, at first I thought it was a sort of magic trick; some terrifying Germanic fairy tale come to life. Maybe a horrific forest imp come to snatch from the jaws of the living to build themselves some sort of, I dunno, tooth golem, or maybe a molar mansion.

“Still, even when I realized there was nothing more than the mundane going on, there’s something to be said for the eerie image of a silent woman appearing after midnight. Of her having to be invited into the home by a loved one – very vampiric – and her hands pulling on snapping latex gloves as she hovers over the sleeping form of her intended victim.

“Guess they don’t need to count backwards from ten if they’re already unconscious. 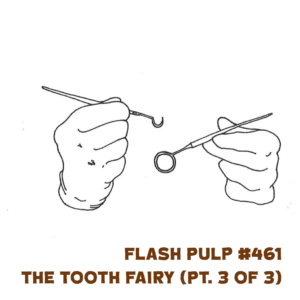 “I kind of get it though: How many hours do you spend in the chair with those folks? Maybe some of them you feel like you get to know. You see them in for their own suddenly missing teeth, or they’ve got a black eye, or a broken arm, and you ask what’s up.

“Not a lot of places left these days that tend to serve a community, but most folks are happy enough to go to the closest dentist. They just want to get in and out. Yet it’s a very intimate situation, really, to be in someone’s mouth – to lie them back and prod some of their most sensitive areas with metal instruments.

“Was that how you figured out Sarah was an addict?”

Her gaze unmoving, Ruth Hill nodded. “Megan came in. She looked exhausted and she was wearing a sweater despite the summer swelter. I was going to keep my mouth shut, as teens tend to get into all sorts of scrapes, but when Sarah arrived to pay the bill she was clearly out of it. One of those users who sticks to weekends and off hours so it doesn’t interfere with her work. The kind that can justify occasionally beating their kid if they can still cover the bills and hold down a job.”

“Why didn’t you just call the cops?”

“Megan specifically begged me – so did Jenny. See, Megan would do anything for her mother. She worships the woman, considers her violence just a part of the disease. Jimmie, on the other hand, always treats Jenny great – it’s her kid who gets the brunt of it.

“Neither wanted to see their loved ones doing jail time on drug or assault charges.”

Mulligan nodded. “Sure, and maybe waking up toothless after an apparently particularly bad jag would set them straight, right?”

Dr. Hill made no reply.

“This isn’t the sort of trouble that I’m looking for,” continued Smith, “but if I figured it out someone else will as well.”

In the old days, in the better days, the fear of discovery would have been enough.

“I’ll have to be more careful,” said Hill,

She shrugged, but made no further answer. Mulligan felt tired. There was no paycheck at the end of this search, not even the satisfaction of having come closer to his goal – no, here was just another human mess, awful at all angles.

Hill cleared her throat. “I’ll deny everything if necessary, but I highly doubt Jenny, or Megan, or any of the rest will turn witness against me – even if they were willing to implicate themselves. Imagine the trust lost between husband and wife, mother and daughter?”

These were hard days indeed, reflected Smith, then the man some called The Mute spoke three words in a language that hadn’t been heard aloud in two hundred years. The tattoos that criss-crossed his body like a cage took on a brief heat, and a look of confusion entered Hill’s eyes.

Though Dr. Ruth Hill would maintain her practice till her hands could no longer hold her drill, it was the last Capital City would see of its Tooth Fairy.