Tonight we hear a strange tale of missing teeth as told to an oddly familiar old man.

Federico’s was a strip mall bar, the sort that served easily fried foods so they could justify adding an “and grill” to their signage. In the lull between those who drank their lunch departing and those who drank their dinner arriving the place had fallen to near silence. A television bolted in a dark blue corner was muttering something about London, but its low volume meant only the bartender, washing cups at a hidden sink, could hear. It mattered little to the establishment’s two patrons, however, as they were locked in their own hushed conversation at a distant table.

“So you heard about my telling it last night?” asked the balding man, his knobby fingers kneading the bill of his Cleveland Spiders ball cap.

“Yeah – hell of a yarn, but you don’t sound as bad as I thought you would.”

A series of browning lumps trailed the left side of the Spiders fan’s jaw, and the right had swollen to such an extent that his companion had initially held up a hand, between his view of the two halves, and wondered aloud that it looked like a before and after weight-loss ad – except, perhaps, that the physical trauma would likely scare off more customers than it would attract.

“The way I heard it, you were saying it was the Tooth Fairy?” 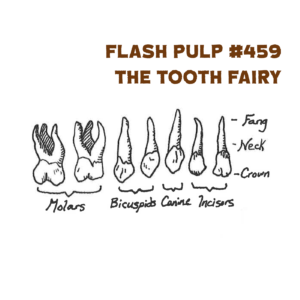 “Yeah, well, listen, Johnnie Walker was helping me unspool the story, and sometimes, you know, when I’ve had a few, I get some weird notions.”

The gray-haired listener ran his thumb over a wrinkled cheek and signaled for refills.

“Same?” asked the woman at the sink, her eyes never breaking from London’s troubles.

“Yep,” replied the buyer, then, lowering his voice and addressing his conversation partner, he asked, “you’re saying you don’t think there was anything out of the ordinary involved?”

“Out of the ordinary?”

“Aw, man, I don’t know nuffin about that,” replied the non-swollen half of the face across the table, but, as he watched the drinks arrive, the questioner caught a sheen in his companion’s eyes and a twitch in his cheek.

“Why don’t you just tell me what happened?”

After a sip of his whiskey and ginger ale that only highlighted his missing front teeth, the drinker said, “well, as best as I can remember it started yesterday morning. I woke up thinking I had a hell of a hangover – probably the worst I’d had all month, and I’m no stranger. It was one of those mornings where you gotta pull yourself up outta the pillow hole, you know? As my feet touched the floor I had one hand scrubbing what felt like a sandstorm from my eyes and the other trying to wipe all the drool from my chin.

“I was like a sail ship in a high wind though – top heavy and swaying between pieces of furniture in the hope that I was making some kind of forward motion.

“Now, I’m not unfamiliar with waking up jagged, but I was beginning to understand I’d wandered into a new realm of pain. I didn’t remember getting in any fights the night before, but, well, that didn’t rule the possibility out.

“After a while I made it to the hallway, and my goddamn stepson, late for school, came running through. I shouted the best ass kicking my tongue would allow, but that’s when he said, ‘Holy shit, you’re bleeding all over,’ and I really knew I wasn’t simply crudo.

“Adrenaline got me to the mirror in the bathroom then, and it looked like my reflection had wandered into a slasher flick. Dried blood on my cheeks and fresh blood still running down my chin. Everything hadn’t puffed up yet, but as I did my best to scrub myself clean I could feel the lumps where the bruises would form – and then my teeth. My front goddamn teeth.

“The evening before was coming back to me, but there was nothing interesting to remember. Early to bed after drinking my way through Wheel of Fortune and Jeopardy, but certainly not enough to wake up feeling like I did. I remembered locking the door before I crashed, as I usually do, and the windows were all still shut when I woke up. Jenny was already gone to work by then – but she always is, and she’d put the deadbolt in place behind her.

“It’s hard to explain. Someone – someone had been in my mouth without my knowing, and not gently. I mean, look at this mess, this is the kind of thing that requires tools and some vigorous elbow work. Yet no one had heard a thing, seen a thing – no one had broken a window to get in, no one had forced the door.

“Paranoia began to set in. I grabbed the kid and demanded answers, but it was clear from the look in his eyes that he had no idea what the hell had happened either.

“By the time I was done disinfecting my mouth with Walker Red I guess I’d gotten myself worked up. I realize how nuts it sounds, but the shock of it, and perhaps the booze, left me feeling like it was either the goddamn Tooth Fairy or some dentist’s vengeful ghost.

“Most of the bleeding seemed to have stopped, and I’d managed to get myself sort of clean, so I stumbled down here to tell the story.

“Maybe, after all that I just needed to be around people, I dunno.”

The tale ended with a hopeful look at his now empty glass. His audience ordered a refill, though the listener’s own can of unadulterated cola remained largely untouched.

“Sorry,” said the drinker, as he tipped his newly-filled glass in thanks, “I guess, despite how much it hurts, the not-knowing still has me talking. Name’s Jimmie Hobbs, by the way.”

“So I’d heard,” answered the stranger as his wrinkled hands dropped his wallet into the depths his hooded jacket’s inside pocket.

Hobbs took another long sip and raised a brow at his gaunt benefactor. “- and you’re…?”

“I’m just an old man with too much curiosity, but call me Mulligan – Mulligan Smith.”

This entry was posted in Flash Pulp, Mulligan Smith. Bookmark the permalink.