Tonight we find ourselves creeping through security to scale a tower – a tower atop which awaits a tale of horror, and perhaps some answers for an aging detective.

The condo building was in the same neighbourhood the old man had been rambling about for a week, but its rows of pristine balconies, hanging from steel and glass construction, were so beyond the area’s gnaw-cornered wood and peeling paint that the entire structure left Smith with the impression the tower might have touched down whole, as if a landing rocket from some distant future.

There was no doorman, but there were five separate cameras covering the lobby from all angles – just in case someone should slip past the call-and-buzz system bolted within the locked vestibule through which all visitors were forced to pass.

Once the blaring ceased, and he was allowed entrance, he noted a well-equipped gym to his left and a sharply dressed woman in a suit sitting in the building management office to his right.

Her stare tracked him as he shuffled to the elevator bank and pressed the button, and it stayed with him until the silver panels slid open and he disappeared inside.

He didn’t blame her: His hooded jacket was a patchwork of cloth and leather, his salt-and-pepper beard was in terrible need of trimming, and his graying hair was as untended as he’d found it that morning when he’d awoken. He was quite sure if she’d been able to see the tattooed patterns that covered his body, whose inky lines seemed to occasionally shift under the gaze of the observer, she would certainly have barred his entry. He was the invader in this brightly-lit alien world. 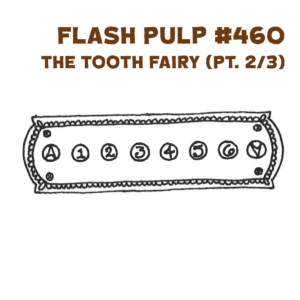 As the panel above the door counted off the floors of his ascent he worked hard not to raise a questioning brow at the camera. He was equally convinced that the woman in the front office was watching him carefully as he climbed, noting his departure on the twentieth – and topmost – floor, just in case she should be forced to give suddenly-summoned police officers directions on where the likely vagrant had gone.

When he knocked at the door he was welcomed, but only once he’d waited out the scrape and turn of six individual locks. It struck him as overkill, even for so pretentious a building.

“Sarah,” she answered with an executive’s smile, and the sometimes PI noted the sculpted perfection of her ivory teeth.

“You have these locks before too?” asked Smith.

She directed him to the living room, a neat collection of white leather furniture set against white walls. Scattered across the glass-topped table that acted as the room’s focus, however, were a spread of dog-eared comics.

As she entered Sarah bent low and stacked the books.

“My daughter’s,” she explained. “Megan loves to draw, and she spends hours staring at these old pages she buys at the local junk stores.”

To Mulligan’s eye it did not appear the woman, dressed in a black blazer and slacks even on a Saturday, was interested in any hobby that didn’t involve a yacht or collecting travellers points for her air fare, but perhaps there was hope for the child yet.

Whatever the reality he knew better than to judge his host by the size of her flatscreen or the fastidiousness of her pinned back and professionally dyed hair.

“Can you tell me about what happened that evening?” opened the detective.

“Do you mean you don’t remember anything unusual that happened that evening?”

“No, I have no recollection of the night at all.”

Could this be the sign he’d been looking for? Had the arcane clouded her vision, stolen her memory? It was a tempting thought, but Smith spent too long being amazed at the oddities of mundane life to let himself jump to the conclusion – or lead his witness.

“What DO you recall?” he asked.

“Pain,” she said. “I knew something was wrong with my jaw as soon as I awoke in bed, but it was – it was hard to fully rise. My tongue felt huge, felt swollen, but when I used it to explore the rest of my mouth -”

There was a tremor beneath the crisply applied makeup, and for a moment the exhaustion about her eyes was too much for her concealer – yet she fought it back, and finished her explanation with a carefully cool tone.

“My mouth was filled with nothing but gums and stitches. Molars, fangs, fillings – all gone.”

Her lips parted wide, revealing the ivory planks within, and with half a cough her dentures landed upon her outstretched hand. From behind her white leather recliner the sound of shuffling feet came from the hallway, and, with the speed of a conjurer’s trick, the false jaws disappeared from her palm and returned to their resting place.

The weight of the telling remained on Sarah’s wilting shoulders, however.

“Megan, I’m glad you’re here. Please show Mr. Smith out – I need to go to my room,” she said, then she stood and exited without a further goodbye.

“She gets anxious,” explained the daughter, offering a smile that was all politeness and perfect – but natural – teeth.

It was in that moment that the truth of the situation landed fully upon Mulligan, and he realized there was no arcane act – no mystic ritual – to be found along this toothless trail.

With a final question, which Megan answered with but a hint of tremor in her voice, he exited, and as he passed under the watchful gaze of the rental agent he moved as if a man certain of his next destination.