Tonight we present The Irregular Division: Crossing, Part 2 of 3

Tonight we run from a car crash and find ourselves under the watchful eye of the law.

The Irregular Division: Crossing, Part 2 of 3

Atlas: I’d have thought the target would simply surrender once injected with a foreign substance and having his arm shattered in a wrecked vehicle, but I rarely understand the motives in this sort of incident.

We deployed to the scene after a unit involved in [redacted] detected the signature of a dangerous strain of bioengineering.

Wily: Did you actually see any of the new dogs in use?

Atlas: Yes, we had three helping us with door knocking. They’re really just smaller versions of the room-sized machines immigration uses to weed out potential medical problems in green card applicants – cancer, lung issues, inherited conditions, whatever might be a drag on the healthcare system – but they’ve managed to cram it all onto the quadruped mechanical frames that normally only hunt the stinkier narcotics.

Atlas: Anyhow, as I was saying, the dog’s footage clearly indicated five runners, and, since we knew [redacted] and his bodyguard had nothing more than an empty needle on them, we figured the [redacted] had to have been squeezed into one of the absconders.

Head and I were sent directly from the facility in [redacted], and, as per orders, we split duties. He went aloft to coordinate the drone and helicopter patrols, and I was left to ground pound with law enforcement.

As all highway and sideroad access had been locked down at the first sign of contamination, we were 90% sure the target was still within the city limits.

Excerpt from the interrogation of Aurelio Medina
Conducted [REDACTED] at [REDACTED], the afternoon of the subject’s escape
Interviewer: Major Nelson Wily

Aurelio: Honestly, at first I couldn’t even believe I was able to stand up. I mean, I looked over and the trio of teen girls seemed to be all right, but the brothers were clustered around the youngest, yelling at him to get up. He wasn’t going to though – not then, not ever.

At least they got to escort his casket back when they were deported.

Anyhow, I ran. Eight blocks over I found a 7-Eleven, amazingly one with an exterior payphone, and I managed to dial my, uh, friend, whose name and address I can’t seem to remember. He drives a cab under the table. I remember sitting on the bench, clutching my arm and breathing heavily. I was probably in shock, but no one approached to ask if I was okay. There were never even news reports that I’d been spotted there, although plenty of people had wandered along to buy smokes and lottery tickets. 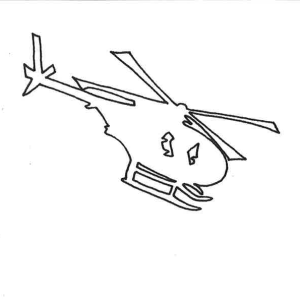 I was a sitting duck on that bench. I kept losing consciousness. I had this dream that my mouth had disappeared, that I was helpless and alone, and it seemed like I woke and wasn’t able to scream. Maybe I did.

A second time I floated up, and I was lying in the cab, but the beating of the crash had set in. My body felt bruised and swollen, and it felt like I was expanding to fill the whole back seat. My cousin told me later that he was afraid I was going to push out the windows or break the doors.

Wily: Why didn’t you seek medical attention? Your, uh, friend didn’t want to get caught with you?

Aurelio: Ha – yeah, right. I was a border jumper who’d fled from a car crash partially caused by a US government hunting machine. I’d been injected with what I thought was a high powered drug causing me to hallucinate all sorts of weird things, and I had no money to cover whatever care I needed even if I could get it.

No, I don’t blame him for not dropping me at the hospital – I thank him.

Wily: So where did you end up?

Aurelio: Let’s just say it was a townhouse shared by a few others. I was given a mat in the basement, and I guess my cous – uh, friend, had to fight pretty hard to keep me there. His roommates had seen the news, and they weren’t excited about having a bunch of guys in riot gear pounding down the door. They simply wanted to be left alone to earn a few bucks and help their people back home. I don’t blame them either.

There were more dreams while they argued. My arms weighed a million pounds and I couldn’t lift them. My fractured bones were grinding against each other like the other half of my forearm was a snake trying to cuddle up to me..

For a night and a day and a night, I slept, then I rose hungry. So hungry.

There was a cup of water beside me, and I drank it in one long gulp. No one was around, they all had jobs to be at, so I stumbled to the fridge on the main level and pulled it open. It was a mix of stuff – fresh vegetables, takeout leftovers, random condiments – I ate it all.

It was while I was chugging down the last of the milk that I realized I was using my broken arm to lift the carton. The pain was gone, and so was the break.

The thing is, I was still exhausted – or maybe it was the big meal making me tired. Whatever the case, I refilled my water cup and went back downstairs.

Now, you have to understand, this wasn’t a fancy place, this wasn’t a McMansion in the suburbs, it was a dozen bodies living in a too-small space, but, with my belly full, my body whole, and my bed firmly in America, I went to sleep pretty satisfied.

I dreamt I was flying.

Shouting woke me a few hours later. The owners of the food I’d eaten were chewing up my friend and he was trying to keep them from heading down the stairs to kick my ass.

Turning the corner at the top of the landing I figured I’d make some apologies, promise them that I’d pay them back as soon as I made a few bucks – and, by the way, did they know of any jobs?

Thing was, they all stopped to stare as I came into the kitchen. I was spreading my hands wide, you know, to show I was sorry and didn’t mean any harm, and I felt my shoulders brush against the walls.

Title: You Will Believe a Man Can Fly

So there I was in the helicopter, but, if I’m totally honest, I wasn’t crazily into the whole thing. Sure, it was neat to be deploying clusters of drones from a whirlybird, and to mentally send those whizzing around the block, but, once I’d gotten yelled at for losing a couple toys while conducting an alleyway re-creation of the Deathstar Trench run, most of the fun was out of it.

We’ve done things I can get behind. We’ve made a difference, I think, but – well, chasing some poor bastard who really only wanted to blend in and live a not-miserable life didn’t seem like the best use of a guy with an illegal computer in his brain and a woman who can punch buildings sideways.

That isn’t to say, though, that it didn’t have its moments.

I’m sitting there, supposedly scanning social media for any personal communications or sightings that might give us a lead, but really just boredom trawling, when the chopper’s heat rig – usually used to bust grow ops with hot roof tiles – goes nuts.

It was the fever caused by the serum that gave Auerlio away.

Well, I mean, that and his giant soaring wings.

This entry was posted in Flash Pulp, The Irregular Division and tagged fiction, immigration, pulp, wings. Bookmark the permalink.