Tonight, we hear the tale of Aurelio Medina, a man on the run.

The Irregular Division: Crossing, Part 1 of 3

Excerpt from the interrogation of Aurelio Medina
Conducted [REDACTED] at [REDACTED], the afternoon of the subject’s escape
Interviewer: Major Nelson Wily

Aurelio: I loved Mexico, but I wasn’t sure I could survive my corner of it. While there were many places in my beloved country that I’d heard were beautiful and untouched by the violence upon my doorstep, I knew there was little chance I’d ever see them in my Abuelito’s broken down pickup.

Yet America was inescapable: It arrived to me on my cousins lips and through the very air around my radio. If you don’t want people to come to this country, why do spend so much time advertising yourselves?

We sometimes sat on the roof of our squat home, waiting for the summer heat to drift out the open windows, and I’d wonder what made this patch of desert so different than what I’d seen beyond the fence outside Ciudad Juárez.

When I asked my grandfather he’d just say, “it’s the same sand.”

Every now and then a relative from down south would come by, looking to stay before meeting with the sort of unshowered fellas who run secret trucks across the border. They’d always make the same pitch to me – you’re young, strong, smart, come with me – but my answer was always no.

The old man had spent most of my life looking after me, and, though he’d never admit it, his knees were getting bad enough that he needed me to return the favour.

They weren’t the only people trying to sucker me into something though, and some weren’t willing to take no for an answer.

Aurelio: No, it wasn’t fear – not exactly, anyway. One day Tito was down at the shop, grabbing a pack of Marlboros, and he caught a local tough guy, Bruno, screaming names at his aunt. Apparently Mrs. Rojas had given his mother an ear full of news on her son’s misdeeds, and even some gangsters still blush to hear their mama is disappointed in them. 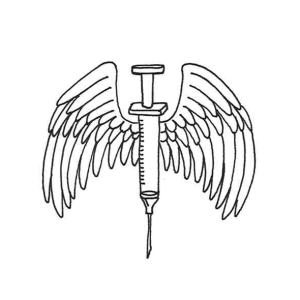 Bruno hit his tia, slapped her across the cheek, really, and my Tito gave him some of the same. I can’t imagine there was much force behind his stick arms, but the thug got back in his truck and took off.

Pops was shaking when he stepped into the kitchen and told me the story. He finished by saying it was the end of it, but we both knew it wouldn’t be. It wasn’t even the end of it for that day.

We were on the roof, that night, when an SUV came barreling down the road and swung into our yard. Abuelito stood, shielding his eyes and telling me he thought it was Mr. Torres come to return his ratchet set, and there was a Pop-Pop-Pop.

The engine noise was disappearing over the horizon by the time I managed to make it to the patch of dirt where my grandfather had fallen.

Maybe I could have moved south. Maybe I should have. My nearest relatives, though, were really only an hour’s drive away – well, if it was a quick line at the border.

I guess I knew who to ask, enough of my cousins had gone over, but I also knew I couldn’t trust anyone who knew Bruno, and that made things tricky.

That’s how I found myself in the back of a short box truck, huddled behind a plywood board that was supposed to fool immigration into thinking it was the back wall of the storage area. It was me, a couple with a baby, four thick-armed brothers who complained the whole time that they’d had a better plan but had been held up visiting family, a trio of teen girls looking to be nannies if they could stay away from the grabby-handed bastards behind the wheel, and two others.

Listen – those two others… they’re the ones who did this to me. One looked: Well, let’s just say he was making a statement with his knuckle tats – but his partner’s fingernails were manicured, and he was getting a nice suit dirty. They also knew the white guys behind the wheel.

Wily: Interesting – and these two men held you down and gave you wings?

Wily: Sorry, just a joke. They look, you know, majestic – I mean, they’re feathered at least. A pair o’ leathery bat wings would be creepy as hell.

Wily: Oh, yeah, that’s just what I need, a bunch of Texan taxpayers getting wind that we’re giving you free medical care.

Wily: Honestly, we don’t know how to help until we know what you were stuck with. Finish the story okay? Every little bit helps.

Aurelio: It was a long trip, and it was hot. There was a lot of moving and braking and moving again, and there wasn’t enough room for more than the lady with the baby to sit down. Eventually we stopped, it must have been six hours in, and there was a pause.

We could hear talking outside the truck, then a curse, and the guy who originally took my money started yelling “run!”

Well, we weren’t sure if he was talking to us or to his partner, but we were halfway to the door before the engine gunned it and the floor lurched forward. Papa caught Mama who held baby, but we all went down like bowling pins.

Knuckles managed to get one of the double doors open, and we see a dog.

I don’t know if they call them that over here too. I mean one of those four legged robots that sniff drugs and such at the crossing.

Aurelio: It was a big dog, bigger than they look on TV at least, and it was chasing us at top speed. I swear it was digging pits in the pavement as it ran.

Tats and the suit started arguing, then a well-tended finger was raised in my direction, and I was grabbed. Everyone else was already screaming, so I joined in, but it didn’t matter. I don’t know if it was just the panic, but the needle looked huge – like the kind of thing you’d see in a Bugs Bunny cartoon.

Anyhow, they poked me, and we made it maybe three blocks. The driver was hauling too fast for his corner, though, and we went sideways. Both doors were flapping by then, and we started tumbling around in space like barbie dolls caught in a dryer.

Suddenly, I was on the lawn. I don’t know if I passed out, or if I just don’t remember the middle bit, but my arm was broken. I realized there was a trail of us, spread across a kids playground like discarded toys. One of the white guys had jumped from the cab and started running, so the dog headed his way.

That’s when I went the other.