Tonight we see off an old friend.

Sgt. Smith and Son in Inheritance, Part 2 of 3

John Smith and Ezra Doss walked on, under elm bough and bright stars and the morning’s dawn. They lost the rails in places, bringing terror to their hearts that was matched but by the triumph of again stumbling across the rotting metal that marked their path.

Three days they marched, sleeping under the summer moon just long enough to be awoken with the sure thought that the Dead Queen was close at their heels.

Legs aching and eyes gritty from exhaustion, both boys fell to tears when they spotted the first stranger either child had seen in years. The round faced woman was naught but twenty feet from the tracks, showing through a halo of green foliage, and it was only once the youths were upon her that they realized she was occupied with fence mending.

“Where’d you tykes come from?” she asked with a smile, her rough gloves wiping away their tears. “Ain’t nothing out there but trees and trouble. I suppose you must be runaways? You fellas leave a couple panicked parents back in Spruce Falls?”

Neither Smith nor Doss had any notion of where Spruce Falls might be, but they nodded in unison.

“Come, my husband, Mr. Delaney, is about to heave a berry pie from the oven, and I’m afraid if we don’t help him eat it he’ll spend the next two days lazing and bellyaching. Once we’ve had your assistance with that chore we’ll pay you in kind with a ride back to town.”

The gray haired woman then ushered them to a table, asking no questions regarding Smith’s missing tongue, and fed them two slices for every one cut by Mr. Delaney, to which the aging farmer playfully complained.

As John cleared the plates, the married couple took to harnessing their beasts and buttoning down the house for a brief excursion. 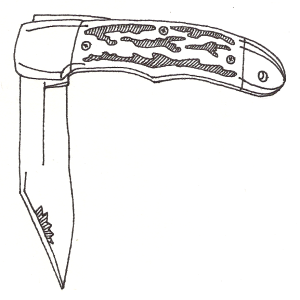 Though Smith did not see it, it was then that Ezra pocketed another stolen trophy.

After an hour’s wagon ride through low hanging trees, they came to a cluster of houses set beside a broad river, and in it a plain whitewashed building simply marked CONSTABLE.

A brown-haired boy of perhaps seventeen was just pushing through the door, but the Delaneys stopped him with a wave.

“These two’ll need a word with Mr. Severin,” said Mrs. Delaney, and it was enough to send the messenger back inside.

Ezra offered a quick thank you, and lept from the wagon’s edge.

Smith, frustrated, not for the first time, that his lack of tongue could not offer up his true sentiments, leant across the clapboard and shook both Delaneys palms with grateful vigour.

The Constable had not appeared by the time they had turned their cart and made for home.

The one-day sergeant would often wonder afterward if perhaps their entire relationship had not been built on such miscommunications. He had grinned at their freedom, but Ezra, reaching into his pocket, was smirking at his prize.

In his palm was a folding knife, its handle made of stag horn except where the locking mechanism was bolted, with brass plates, at the tip.

This second act of theft, following on the revelation that Ezra had snatched the supposedly-mystical coyote mask before their departure, was too much for Smith – with no tongue with which to express himself, the ten-year-old’s fist clenched.

“We better get moving before the Constable actually arrives,” said Doss, and it was only the fact that the boy stood two inches shorter that kept John from punching him.

Setting his legs in such a way to make clear his half of the conversation, Smith stood, waiting.

“Idiot!” responded Ezra, and he turned. Sprinting down the boardwalk, the thief disappeared between an inn and its neighbouring grocery.

Smith thought it likely he’d come running back within the hour, as he’d done on those occasions when they’d angrily parted ways over a contested game of Hide-and-Seek or Coffin. It would be the last he’d lay eyes on him until both were young men, however.

Perhaps it was the lack of tongue, or perhaps the scars scrawled in specific patterns across the youth’s back, but Constable Severin took rare pity on the boy.

When no parents came knocking, and no reports of missing mutes filtered from distant detachments, the Constable left the orphan to sleep in the office’s rarely used second cell. Severin found the child’s silence meant most forgot he was at hand, but the lad’s worth was proven when his quiet observation noted the tiny pistol William Salter unstrapped from his ankle upon his fifth drunk and disorderly detention.

Severin had learned to fully ignore the man’s rantings about targeted harassment all too well, and it was Smith handing across a hastily scrawled message that put both beyond range before Salter could deploy either barrel of his Dillinger.

In the years that followed, Smith would gain an education in police work, rail riding, and the true nature of the world outside the Dead Queen’s domain, but it was only once he’d crossed the southern border, into America, that he made effort to prove his existence.

It was a long fight with bureaucracy, especially as what origin information he did provide was entirely fabricated, but, in the end, those behind the red tape preferred to document one more John Smith than let an able body walk as a ghost among them.

Once arranged, the mute thought no more on his early days. Though he tried his luck at many occupations, none seemed so interesting as his first – still, it was a newspaper article that, in many ways, pinned the lawman’s badge upon his breast that he would wear till the day he died.

A murder had taken place to the east, a scandal sheet novelty from Capital City. A socialite known as Mother Beatrix had had her throat apparently slit by her husband, a thin-faced drunk. What made the item of interest was that it had happened at a party, in full view of the guests. The drunk had swaggered into the midst of a costumed affair, gathered in a rough sack all items of value displayed on shelves and in nooks, then he’d stifled Mother Beatrix’s ongoing complaints about his intoxicated hooliganry by laying the blade of a stag-handled knife across her neck.

Witnesses would later swear that Mr. Beatrix was, in fact, in a east-end club at the time, and his belly too heavy with scotch to have overtaken a flight of stairs, much less Mother Beatrix.

What started as a vague suspicion became a secret compulsion, as collected in notebooks piled deep with press clippings. Some mentioned the stag-handled knife, many did not. Most often there was simply a discrepancy of locations: Reports of two versions of the same murderer, one oblivious, the other homicidal.

So began a slow simmering chase, yet Smith could not stop the velocity of his course. He fell in love, married, had a son. Through hard work, and perhaps some gentle blackmail, John rose through the ranks of law enforcement, his skills and quick pencil work carrying him where his tongue could not.

He worked hard to keep his first lifetime – that of Ezra, the Dead Queen, and the secrets his tongue had been removed to keep – separate from that of his second, but the doppleganger deaths continued on every five or six years, and each fed his obsession as if gas to flame.

Though he’d named his child Mulligan in an attempt to bless the boy with a new beginning after the generations of Smiths that had been muffled at the Dead Queen’s command, he could not help but teach the child to collect each scrap of paper handed to him by his father. It was not lost on the man that he had taken up the very sort of training regime involving hidden and obtuse lore, that he had so hated when he himself was a child.

In time he found that he was not forgotten. On a quiet street, decades after Smith had thought his mind had let go of the details of the Dead Queen’s stare, a girl the age of his own son had approached him with a message.

“We are glad to see you well, Mute. Surely now you realize that the magic you thought dead has, in truth, returned to the world.”

It was not the words, but the fact that the girl’s demeanor was so true to that of her great-grandmother, the Dead Queen, that convinced Smith. They talked and wrote for some time, and many old ills were forgiven on either side.

Despite his hopes, however, they had no more knowledge of Ezra, nor the coyote’s cloaking face, than he.

On occasion, in the years leading to his retirement, Smith would walk the edges of a crowd gathered at a murder scene and think, just briefly, that he’d caught sight of Doss’ now aging face – yet always the visage would fade from the gawkers well before the sergeant could navigate the wall of bystanders.

In his final years, his wife long dead and his friends well established, Smith took his greatest joys from discussing petty matters with his only child. His letters were copious, and Sunday brunches of Eggs Benedict were the norm.

It was with a strange tingle of excitement that the old man received a text from his son that read, “Do you know anything about a wooden coyote mask? I’ve got something interesting under the west side of the Lethe bridge.”

Hating to waste words that were not on paper, the ex-policeman had called a cab without bothering to reply.

He found nothing but discarded Smirnoff bottles and the gurgle of the river on the bank beneath the bridge until he turned at the sound of approaching footsteps.

Along came Mulligan, the black hoodie he’d worn as his uniform since the death of his mother zipped tight, yet, as he stepped close, there was a knife in his hand.

Smith knew it to be the blade he had seen Ezra produce on that warm August morning. It would be the second last earthly sight of the old man’s life.

His eyes lifted from the horn grip, still lodged in his belly, to the man he had thought his child – but now the hood was filled with naught but a coyote mask and a gloating chuckle.

Smith’s legs, those reliable spindles that had carried him from the distant shore of the Winipekw and across many a cold Capital City sidewalk while on patrol, gave out, and he rested for the final time.