Tonight we delve into the knotted history that would one day make Smith a Police Sergeant, a dedicated father, and a haunted man.

Sgt. Smith in Inheritance, Part 1 of 3

The resort on the banks of the Winipekw had long ago separated itself from a world concerned with wars and plague. What had once been the town of Hearse had both contracted and decayed, leaving but the massive lake house, and a cluster of out buildings that rose and fell with the passing decades.

In young John Smith’s time, he knew every one.

His games of hide and seek, played with the single other child at hand, a boy by the name of Ezra Doss, had known little respect for the tool sheds and barnyards that housed the equipment that fed the majority of the retreat’s residents, though they’d shown some care for Mr. Madison and his swinging blacksmith’s hammer.

Doss and Smith, eight and ten respectively, had learned in time that they had much in common, though they rarely thought to pass notes on such topics. Smith’s parents had promised a quick return after a month’s voyage to the south, but he had not seen them since the age of five. Ezra’s mother had also departed on the sole transportation in or out, the supply boat that moored once monthly.

She too had promised a quick return and not met her guarantee.

“I’d have abandoned me too, if it meant living in this place,” were Ezra’s lone words on the matter.

John had spent his entire life between the sprawling walls and surrounding timberlands, his only outside contact coming from the steady inflow of books and news journals demanded by the woman the forty or so inhabitants of the Winipekw’s shores called the Dead Queen.

Though Smith was a mute, Ezra had been happy to have a guide about the place upon his arrival at the age of six. They’d been cast together since, as those who were meant to act as communal babysitters in their parents’ absence were happy enough so long as the pair entertained themselves and kept up with their lessons.

There was much to see beneath the monolithic roof beams and along the rough-stone patios. Cruel looking farm implements lurked in the barns, robins nests and raccoon hutches at the edges of the tended lawn, and, on the top most floor, in a highly restricted but little observed library, stood a series of glass cases containing artifacts of mystic origin – supposedly.

By ten the someday policeman had decided the magical nature of these ancient tokens was nothing more than a legend tended to by a group of religious fanatics. The Dead Queen, sitting always by her fireside even on the stickiest summer days, was nothing more than an invalid, and the only subjects of worth in his years of tutelage were the reading skills that had taught him of the outside world, one Allan Quatermain or Three Musketeers adventure at a time.

It was a bitter pill to think Smith had had his tongue cut free by the old woman, his supposed teacher and keeper, to safeguard arcane words that had no power. 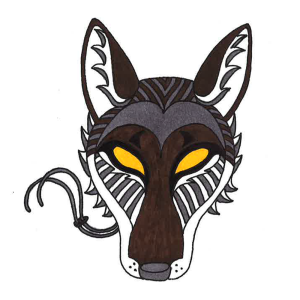 The relics were not without their entertainments, however. It was easy for a youth of that age to lose his gaze in the gleam of the silver dagger’s wicked blade, and there was a mask of wood, carved to appear as if a coyote’s face, whose empty eyes seemed to follow the viewer at any angle.

“Keeps better track of us than any of these blind-idjit adults do,” Ezra had often commented.

Though Smith had long heard tales that the knife might summon duplicates of anyone whose blood it tasted, or that the canine face could transform to mimic whomever its wearer desired, the boy had discovered a different truth when he’d lifted high the glass and experimented with each.

No twins came at his sliced finger, and no mirror displayed anything but the ornate disguise when the cur’s visage was donned.

It was then that John came upon the notion that his guardians were in fact captors, that they had likely done away with his and Ezra’s parents, and that their plans were nefarious at best.

Even the apparently rotting woman all called the Dead Queen was likely just a convalescent infected with the sort of disfiguring illness that the pulp novels often considered a sign of a corrupted mind.

So it was, at ten, that Smith – knowing full well that the ship’s master would not transport any load that would ruin his regular contract – had begun to patrol the outer woods, looking for any sign of life beyond the compound.

After a week’s fruitless hunting he’d literally stumbled across the overgrown rail tracks that had once acted as the ruined town’s lifeblood.

What followed was a months’ planning and rationing. Tins of crackers crept quietly from the kitchen, and uncooked potatoes went, uneaten, into a hidden cloth sack.

Every note on the subject Smith scrawled on paper scavenged from the back of books and the notebooks in which he did his school work, and each missive was carefully burnt shortly after writing. Even then, he dared only pass his ideas to Ezra when deep enough amongst the pines to be sure of their solitude.

“Better than my intention of murdering the captain and stealing his freighter,” Doss had chuckled when Smith revealed his proposal.

There’d been no question that the boys would depart together.

Later, when he realized the depths of his mistake, the getaway’s mastermind would admit that, though he’d convinced himself it was the one chance to save the other lad, he’d likely been simply too afraid to trek into the unknown without company.

Smith’s last sight of his childhood home came as he exited a rear door under a low-hanging August moon. The weeds and grass beyond the creaking screen seemed awash in silver, and the insects that buzzed at their approach hummed as if carrying the electricity of their excitement.

Though their escape seemed likely to end abruptly under the snap and crack of a decaying rail trestle, and again when they fought their way across a river whose current nearly carried them from history entirely, they did not stop until dawn – and still just long enough to open wide a cracker tin and demolish the crumbs within.

It was then that Ezra revealed his pilfered memento, the stolen coyote mask, and the real trouble began.