Tonight, Thomas Blackhall, master frontiersman and student of the occult, finds himself in an unlikely conversation, with a fairy woman and a deaf man, on the lonely banks of the Malhousen River.

The Weeping Woman: a Blackhall Tale, Part 3 of 3

Blackhall’s limbs were heavy with memory and heartache as he pulled himself over the side of the tiny rowboat, yet the banshee’s song of tears would not relent.

It took Wyatt’s guiding hand to keep the frontiersman on course through the fog of sentiment that pooled on his cheeks, but it was not a distant journey to the stone on which she perched, head in hands.

A sleek limbed figure in a dress of archaic form, she looked as if a village girl lost some two-hundred years – it was only the bolt of anguish that accompanied each convulsion of her shoulders that marked her as otherwise.

The sound of Thomas’ knees collapsing upon the wet sand drew her gaze, and the curve of her brow betrayed her surprise at their arrival.

Still, though her eyes were red with use, the banshee’s spine braced, and chin stiffened, at the intrusion.

“Is this what it’s come to,” she asked her damp palms, “the hayseeds have rallied to accost me like some whisky-tongued roustabout?”

Her hushed tone broke the weight of emotion upon Blackhall’s spine, however, allowing him to push to the surface of his grief. 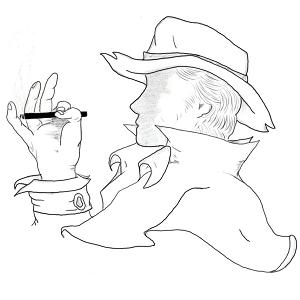 While he could, he said, “not at all – though they do worry over what your despair portends. If hearing the sobbing of a banshee signals death, what then, they must wonder, does it mean for one of your kind to weep so long and so deeply? No doubt they believe the entire township is on the verge of depopulation by plague.”

“Always for you, always for you, damnable humans,” she replied, but her whisper was low enough to let him to stand without aid. “Why should I worry over their lot? The white-collar yonder has launched a multitude of prayerful curses in my direction: First wishing me away, then requesting my obliteration.

“Where is his concern for my anxieties? Does he not consider that I too may seek succor, or at least simple understanding?”

Desperate to be clear of the unblinking memory of Mairi’s slack face, Blackhall nodded, replying, “I’m sure the Father means well, but ‘tis an easy lesson to forget that charity means considering the flow of hard nature, and not just the metaphysical.”

Wyatt, unsure of how to add to the conversation, removed his hat and took a seat upon a tumbled log as if welcomed into any mundane stranger’s parlour. In truth, it was this act more than any of Thomas’ words that brought the banshee’s tone some patience.

“For five hundred years,“ she said, “I watched every birth and burial the Ó Braonáin family undertook. I wept silent tears of joy at the arrival of every bairn, and wailed a warning at the death of every drowned fisherman or tottering grandmother. I chased them from farm to salt and back again a dozen times, and never once did I fail in my craft.

“Yet this is where it ends. I followed the last transplanted branch of the clan over sea and up river. I watched his every struggling effort, and shared his joy at the hope that comes at a new start, even if it means a sore back and tired arms. Still, his fate was nothing more than a growth in his belly, and a moaning death before he might take wife and renew the line in this fresh soil.

“Now it is he who was planted: A year dead in the ground, buried under Father Stroud’s guidance.”

Her tone was thick but controlled, allowing Thomas to ask, “do you feel they treated the last of the Ó Braonáins unfairly?”

“No more than any else,” she answered, “- but what of me? Where should I go? What do I have? There is no one left to watch over, no one left to mourn. I can feel the drain of the occult from this world, yet I can not bring myself to despair any further.

“It would have been better to wither at home, where at least I knew the stones upon which I’d rot.”

Her gaze was locked on Thomas, as if he might have an answer, and, while her lips refused to tremble, he could see the pain of five-hundred-years of loneliness.

However, though he could but make out half her words, it was Wyatt who replied first.

“I spend most evenings in cloistered silence,” said the deaf man, his throat tight, “but I would be most pleased to come calling across the brook, or wherever else you might wish to meet. I have little to offer beyond lopsided conversation, but I would be happy to share my letters from beyond, and perhaps a taste of my dandelion wine, should you be so inclined. Moreover, if you have the patience to tell it to a man who needs much repeating, I would glory in the tales you’ve no doubt collected in your time on watch. There is no reason the Ó Braonáin line you knew can not live on in story.”

His words echoed Thomas’ thoughts. It was a temporary solution at best, but Blackhall knew that any lifeline was better than none to lungs and heart drowning in depression.

Nodding, he added, “- and I can no doubt convince the parish that the peace your company offers is worth a handsome payment, Wyatt.”

It was only then that proper introductions were made, but a night’s worth of conversation brought them to many matters: The foibles of men and women long deceased, the idiosyncrasies of penpals from distant lands, and even the seemingly endless march to Mairi.

By the hour at which dawn fell upon the trio, there was naught but laughter.