This week’s episodes are brought to you by The P.G. Holyfield Cancer Support Fund

Tonight, Thomas Blackhall, master frontiersman and student of the occult, takes a relatively long trip across a relatively narrow river.

The Weeping Woman: a Blackhall Tale, Part 2 of 3

From somewhere in the darkness beyond the river’s rushing water came the noise of sorrow and collapse.

From somewhere in the murk came the gurgle and crack of honest tears.

From somewhere in the gloom came death.

The crowd stiffened as one at the noise of the woman’s weeping.

“You look concerned, gentlemen,” said Blackhall. “Is this wail not why you stumbled from the comfort of your hearths?”

Gathering his shoulders, the priest motioned two thick-armed cow wranglers towards a shed at the edge of the churchyard, then the red-haired man stepped into the beam of the lead wobbling lantern.

“My name is Father Stroud, and it is indeed exactly why I’ve collected these men here. We’ll have this dilema out tonight, and we’ll have it honestly – but we need no charlatan mystic defrauding poor Wyatt and putting the rest of us at risk.”

“You’d like to see my credentials then?” smirked Blackhall. “Wyatt is only poor in the sense that you all underpay for the services he renders. I’ve asked him for nothing more than an afternoon’s conversation.”

“We all know what dangers lie out there,” answered Stroud, “if not money, then what is your hidden motive in interceding in the matter of the banshee?”

Before Thomas could answer, however, the dispatched farmers returned with a small white-washed rowboat on their shoulders.

With an inelegant splash, they dropped the craft in the shallows.

“Huh,” said Blackhall. “Was it your plan to fit the lot of us, lap upon lap, in this Sunday paddler? Such a dinghy will hold two at best. Perhaps, though, if you all tether yourself together I might drag you across the flow?”

“Obviously we can not all join you, but the community will have a representative at the table,” answered the priest.

“I think -” Thomas began, but Stroud raised a finger and culled a broad man by the name of Perry from the crowd.

With a shrug, Blackhall assured himself that his gear was still sitting on dry ground, but tugged his greatcoat over his shoulders. There was not but mundane survival amongst his bags, for he’d long relinquished his arcane tools to the care of a firmer guardian, but he would not, and could not, relinquish the braid and letter that rode within his coat’s breast pocket.

Setting his left hand on Wyatt’s shoulders, the frontiersman held up the five digits on his right, then pointed to the ground at his feet. Finally he took his position in the boat, opting for the lover’s perch so that Perry was left the oars.

The first rower was a strong man.

To Thomas’ mind it was as if approaching the heat of a black sun, or attempting to scale the height of a waterfall gushing naught but sorrow. There was a temptation to wave his gondolier off, or suggest he approach from some protracting angle, but Blackhall’s occult studies had taught him that it would only delay the inevitable.

Perry’s strong arms carried them half the distance, then the ferryman’s weeping for his eldest child, deceased some two years after a decisive kick from a startled bull, brought their trajectory about.

His momentum did not stop even when they’d reached the shore, and he was on his mare and into the darkness before any questions could be held to him. 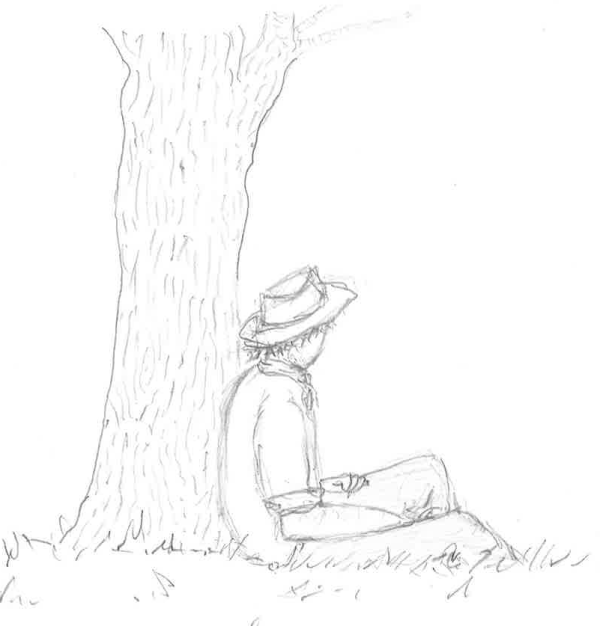 “I think -” Blackhall began again, but Stroud again raised his finger, this time pulling a lanky parishioner by the name of Johan from the crowd.

Johan was lanky-limbed and sharp nosed, but he smiled at the news and bowed repeatedly to the priest as he approached the boat.

As he pushed off, he began to sing of the sunset tree.

The second rower, then, was a pious man.

“The twilight star to heaven,” sang Johan, “and the summer dew to flowers,” yet each splash of his paddles seemed to pick up weight.

“And rest to us is given,” he continued, “by the cool soft evening hours,” but it was for naught.

He’d swung around fully before realizing he’d made any turn to the boat, but he made no attempt to right his course as the sound of the banshee’s mourning chased them back to their point of departure.

In a wavering voice, Perry excused himself to the silence of the sanctuary beyond.

“It’s no aspersion on his faith,” said Blackhall, “it’s just a matter of applicability. Prayer is no greater defense in this matter than it would be against the current of the stream.”

He paused then, awaiting the inevitable interruption, but Stroud made a point of holding his tongue.

“I think,” Thomas continued, “we’ll try Wyatt at the oars. It seems your pity and your piety have made you blind to his obvious strengths.”

The light was dim and flickering, making lip-reading a difficult undertaking, but the deaf man was quick enough to discern everything Blackhall’s nod was intended to convey, and he did not hesitate to take his place.

Within seconds they were off again.

Though he did his best to muffle the otherworldly sobbing as they approach, the repeated trips had also taken their toll on Thomas.

His mind had retreated – as it did as sleep approached, or he took a few cups with a friendly face, or his feet stumbled through the endless ferns and bramble – to the thought of his dead wife, Mairi.

At the halfway point it was only his teeth upon his lip that kept him from tears. The smell of autumn leaves came to him. The smell of a small fire in an English forest came to him, carrying memories of the lusty scrabbling reserved for lovers long parted.

Christmas came next, Mairi’s fingers on his ever-shaking knee, the anxiety of their announcement welling in his throat, the warmth and love of the house they intended to fill further, the heat of her neck and the breathy scent of wine filling the darkness of a back-corridor linen closet.

Thomas howled, and the banshee howled.

He damned himself for ever having spent his short span anywhere but at her side.

Then the bow touched softly upon the shore.