This week’s episodes are brought to you by Lies & Half Truths!

Tonight, Bunny Davis, apprentice to urban shaman Will Coffin, has had enough. 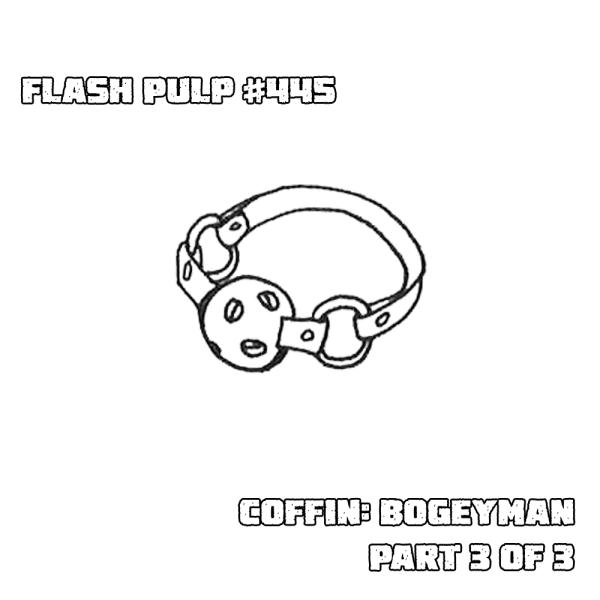 Welcome to Flash Pulp, episode four hundred and one.

Tonight we begin our slow approach towards Halloween with a tale of Capital City tricks and treats.

Coffin, urban shaman, and Bunny, his sobering apprentice, sat on the faux-wood plastic bench of a Capital City bus stop.

It was the sort of chill spring afternoon that, to Will, always felt more like fall.

His roommate’s thoughts were moving in a different direction.

“I dunno,” answered Will, “perhaps it’s last year’s lazy raking job by the city workers, but I’d say it’d make for a solid evening in October.”

Some days were better than others for the recovering alcoholic. Some were worse.

“Maybe it’s always been this dog-molestingly f#cking miserable outside and I didn’t notice it under the fermented potatoes’ heat,” she replied, her neck craning above her fully-buttoned denim jacket.

Spotting a jaywalking woman wearing several layers of filth-blackened sweaters while pushing a shopping cart brimming with empty cans, Bunny reminded herself that she was supposed to be working on her perspective.

“I guess if it wasn’t for my ass freezing to the seat this’d be some decent Michael Myers weather,” she added.

“You know, the crazy Halloween f#cker with the knife and the mask.”

“Sorry, you’ll have to be more specific, I’ve known a few Halloween crazies with knives and masks.”

It was a rare thing, in those days, for Coffin to crack a joke – and rarer still for Bunny not to be able to tell if his comment was serious or not.

The silence returned, and the bus did not arrive.

“Have you read up on the candy man?” the Coffin finally asked his student.

“Like, that crazy b#stard with a hook for a hand that appears if you say his name three times?”

Will turned, his eyebrow raised.

“Another movie – but, in that case, the answer is no.”

Shifting to his left and seeing no approaching chariot, Coffin leaned back against the cold plastic, placed his hands in his pockets, and said, “this’d be a few decades back – a simpler era, if you believe the nostalgia. You know, back when the outfit options were mostly Dracula, Mummy, or Ghost.

“Jarvis Beauford was the sort of old man who cared for nothing more than network news broadcasts, and, even then, simply as proof that the world was going to hell just as he kept telling those who’d listen.

“Honestly, I can’t imagine there were many of those left by then.

“He’d spent thirty years working for the city before I ran into him, and his major preoccupation was road kill.

“Raccoon didn’t quite make it across the street while some van-wielding mother of seven was distracted by a screaming baby? Someone poison a stray dog because it wouldn’t stop wandering into their yard with thin ribs and an empty belly? Sixteen wheeler plow through, over, and around a fawn too fresh from the forest to realize it shouldn’t be wandering across the western highway?

“Jarvis was the guy you called.

“Best thing to wash away the stink of the day, he’d claim for the fifteen years he managed to keep his first wife, was a good dose of cheap beer. Hard to say if it was his liquid habits or his amateur taxidermy that finally pushed her away, but I’m guessing it was a little of both.

“The western end of town was still in the middle of collapsing then, and it was mostly a jumble of cheap World War II housing filled with the usual mix of hollow-pocketed young families, bone-broke students, and those so old they talked about the place in terms of ‘back when it was nice.’”

Bunny coughed and said, “so far the most unbelievable part of your story is that that neighbourhood was ever not full of craft beer drinking ###holes and greed-eyed yuppies.”

Coffin leaned forward. “As I was saying, it was Halloween night in an age before grubby-fingered looters weren’t allowed to trick-or-treat after dark.

“Jarvis had his light on, but it was grimy enough that he didn’t notice me standing in the gnarled mess of his rioting bushes when he shoved open the screen door for the kid in an unusually realistic E.T. costume.

“”Trick or treat,” says the kid, as he catches some tossed confections.

“”Little of both, maybe,” replies Jarvis, while grinning like he’s been gifted a tanker full of Milwaukee’s Best.

“Beauford seems reluctant to let the moment end, but the lingering gets weird so finally he starts retreating – then the kid does something that takes us both by surprise: He unzipped his neck and chin to reveal a soft round face and a glowing mop of brown hair.

“”I can’t wait!” says the delinquent, and he digs into his bag with both rubber-gloved hands.

“Jarvis’ face is fighting with itself; he can’t seem to decide if he wants to stop the gluttony or if it’s the greatest thing ever. The grown man giggles, pans his view up and down the sidewalk, giggles again, does nothing.

“I’m maybe ten feet away, but I can clearly hear the smacking of the boy’s teeth as he chews. 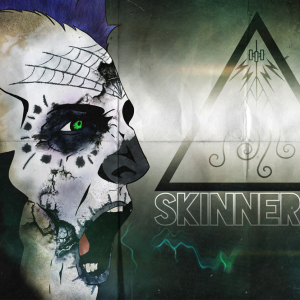 “The candy man’s face drops. He can’t look away, but his giddy glee has become total confusion.

“E.T. turns a little as he ducks down for a second sweet, and I can see the blood running down the front of his costume. I can see the gap where his lip has split to the gum line. I think he knew I was there and it was for my benefit. He even flashed a smile that pulled the slice wide, revealing the pearly whites beneath.

“Then he stands up and in goes the next mouthful.

“Now, you gotta understand that I was new to working alone at that point, and – well, before this recent explosion there was very little occult business to be undertaken beyond the occasional haunting. The season has its rep for a reason, though, even if it hadn’t meant much for two centuries.

“Still, it’s the thinnest the veil gets, as they used to say on In Search Of…, and I’d read up on this wee bugger in a Blackhall tome.

“Kids’d apparently summon the thing back when the world was brimming with mystic juice and people were willing to sacrifice a cat or two for a harvest festival urban legend. A shapeshifting imp – really just a trouble maker raised to play into the sick sense of humour they had when everyone was dropping dead of plague.”

“As it turned out,” he continued, “between the booze and the blood, that was about all old Jarvis could take. Poor bugger went over like a carp landing on deck.

“I had to do something. I mean, it’s one thing to set a minor demon free to roam the streets out of curiosity, but it’s quite another to watch a guy in a dingy white undershirt flop to death on his porch.

“No cell service back then, of course, so there I was, running around his wood paneled living room, knocking over empty Busch cans and tossing aside stacks of TV Guide in search of a phone.

“You could read those walls as easily as the dog-eared copies of Penthouse Letters spread across the living room table. Here was a miserable man, wallowing in his mire.

“How miserable? The kind that frames his divorce papers and hangs them on the wall.

“The kind that has stuffed heads on plaques as the only type of other decoration in the space he most uses.

“There were three long rows of decapitated animals. It looked like he’d placed them side-by-side, in the order he found them, starting at the door. When he’d completed the loop he’d simply nailed the next stapled-together fawn skull a level down and begun again. Raccoons, a variety of breeds of cats and dogs, deer of various sizes: I’m no expert in the field, but there seemed to be very little care for the condition in which he scraped them off the road. Some skin was so rotten you could see the foam padding beneath.

“Then I toured the kitchen. Stacks of dishes, rinsed but left haphazardly on the counter – and a pot, the bottom of which smelled sugary sweet.

“There wasn’t a phone near the table either, where I found the hammer and a shopping list.

“Well, I didn’t know, as Beauford tossed a wad of hand-wrapped candy into the tyke’s pillowcase, that he’d spent hours crafting the soft taffy, nor that he’d been just as careful in inserting the shards of a number of shattered razors into the cooling goo. I didn’t, but the imp must’ve caught on somehow.

“I don’t think it knew what would happen, but at that point I don’t think either of us were sweating Jarvis’ heart attack as I crept away to find a too-late payphone.”

Bunny snorted and said, “perspective is a greasy f#cker like that.”