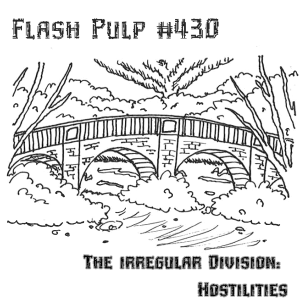 This week’s episodes are brought to you by Nutty Bites

Tonight we tell a brief super-heroic tale from the pulpy pages of Capital City’s funny books. A story of bumbling newsmen, space avengers, and true villainy.

Bruce Clark was collecting his jacket and snapping shut his laptop as his date, Margot Cranston, watched him over her smirk. It was nearly midnight, so the main floor of the Daily Bulletin was empty except the lovers, but the newsman was in a hurry to be away.

“We’ll catch a quick bite to eat,” he was saying, “head back to my place for a, uh, a few moments, then I’ll scoot you home before he -”

Beyond the frosted glass of the front entrance the elevator dinged.

The hallway filled with two bursts of muttering, one low, one aggravated, then the door swung wide.

His face was red, his cheeks damp. He turned his head away from the adulterers, unable to meet their wide-eyed stares.

Her husband made no reply, so she continued.

“Even you have to know things have gotten bad. It’s to the point where you’re away all night, every night, drinking – then, when you finally drag yourself from bed the next day, you’re an utter mess.”

“I have loved you so,” offered the injured man.

“- and I have loved you, but it’s not enough! You’re always missing. You’re always distracted. You’re always focused on ‘heading to have a few with the boys.’ When you disappeared from your sister’s wedding reception in June… well, that’s when I met Bruce.”

“My own sister’s wedding?”

“You were drunk and in a gutter for three days! I thought you might be dead!”

“What makes this chump better?”

The shadows beyond Lee’s left shoulder shifted, and the menace that was the Blood Manticore stepped forward. Hefting a gnarled energy weapon of his own malevolent design, the recent prison escapee welcomed himself into the intimate scene.

Margot and Bruce returned to their state of stunned surprise, but Lee simply continued his heavy breathing and shoulder heaving.

“Oops,” said the Manticore, his lion’s face pulled into a tight grin, “do not let me interrupt.” 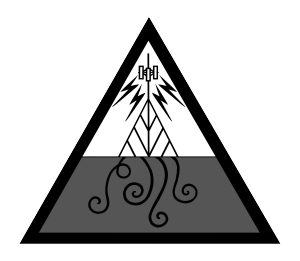 “What?” asked Bruce. “Why are you here? Did you bring a hitman, Lee? I didn’t even know she was married!”

The villain chuckled and prodded Lee’s spine with the broad muzzle of his cannon, insisting, “I said go on.”

Lee turned, his voice having found fresh strength, and repeated his question.

“How do you know he’s a good man? I’ve read his articles and most of them are excuses to complain about high taxes and the poor people he has to step over when he exits his neighbourhood.”

Behind him, the monster’s scorpion tale danced with eager curiosity.

Taking a deep breath, Margot’s lips flattened, as Lee knew his wife’s lips did whenever she’d come to a hard decision.

“Well,” she replied, “you know that I’ve had a history with Rocket Strongman. Bruce and I were together during that blimp tour that went out of control, and it was just as he ran to lock himself in the bathroom, pretending to vomit, that Rocket Strongman appeared. The same sort of thing happened when the lunar invaders tried to turn the city into a private zoo. There’s so much love in the eyes behind that mask, and, well, he’s always so flirtatious.

“How can I think he’s a good man? Well, honestly, I – I believe that Bruce is Rocket.”

The woman wheeled on her lover suddenly, whispering loudly, “save him!”

The reporter’s forehead dropped into his rising palms. “We’ve talked about this. I’m in news, I work long hours, when would I even have time? I’ve told you already that it’s just a coincidence that you’ve never seen us together.”

“Coincidence?” answered Lee, his voice seeming to gain heat, “It’s not coincidence. When there’s danger you sprint away so quickly Margot doesn’t even realize why you’re gone.

“I’ve known for a long time – well, a couple months, but it’s felt like forever. I realized when you were trapped together on the Hilton’s rooftop during Zombie Ape’s attack on the city. I – ”

Cranston looked from the newsman’s clean-shaven jaw to the gaping barrel of the Blood Manticore’s matter disassembler.

With a shrug, he gave up his secret.

“I’ve known, but I’ve been unable to do anything about it. It’s been killing me. I damn near actually did start drinking. If I’d said anything, though, it would’ve given away my identity.

“Besides, I thought it would be the best thing for you. You were happier than you’ve been in a while, and I’ve always worried that you’d get hurt. You weren’t the one struck by the meteor, you don’t need to carry that responsibility.

“You mentioned my sister’s wedding – you didn’t find it odd that my disappearance and supposed binge happened to coincide with the Condor Crisis? I mean, I was finding feathers all over the apartment for days after I got home.

“Still, I should have told you.”

Silence descended on the room as Margot’s face shifted under the stresses of processing this new information.

Finally, Bruce asked the Manticore, “will you kill us all now?”

“Are you kidding me?” replied the beast, “Pushing my luck with a fight at this point would be an amateur mistake. It’s just when you learn these sorts of juicy tidbits that we villainous folk seem at highest risk of memory-erasing blunt force trauma, or, worse, an accidental death. I’m a mastermind, I play the long game: Outing Rocket Strongman to the press while destroying his marriage will do nicely.

After deploying his signature red smoke screen, they watched his shadow stroll away beyond the frosted glass.

Bruce turned his attention to the strongman. “Aren’t you going to chase him? None of the windows in this building open and I didn’t hear the elevator, so the stairs are the -”

As Clark spoke, Margot stood from her perch at the desk’s edge and approached her droop-shouldered husband.

Much to the Manticore’s pleasure, and to the final detriment of Margot Cranston’s relationship with Bruce, the Daily Bulletin’s readers were well aware of Lee’s identity come the morning.

Yet, five years later, when an errant transmorphing beam passed through Archimede’s Gem and into the glass factory in which The Evil Twins had Margot’s tour trapped – the very moment she became Ms. Transparent – she was still gladly wearing her husband’s ring.