Tonight Will Coffin, urban shaman, and Bunny, his recently sober apprentice, discuss a midnight encounter with a gasket baroness.

The labyrinthine house smelled of potpourri and pine, and the deeper into its architecture that Bunny ventured, the surer she became that the smileless man who’d answered the door was, in fact, undertaking an elaborate prank.

“We off to see Barnum’s Egress?” she asked, but Will was too distracted to bother faking a chuckle and the doorman didn’t slow in his navigation of the hardwood sea.

Dining set islands gave way to shorelines of couch, then the couches themselves were crowded by towering library cliffs. Finally, they came to a stop in a land of Persian rugs.

The gray-haired woman at the room’s center wore her wingback chair like a throne, but her only subjects seemed to be the multitude of oil paintings that covered the walls. No image was larger than six inches wide, and there was no buffer greater than a thumb’s width between them. Thousands of tiny faces stretched in uneven rows to the vaulted ceiling. 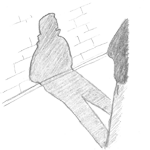 As if playing his entrance in reverse, their guide disappeared backwards through the doorway, leaving his retreating heel taps and the tick of an out-of-sight grandfather clock to fill the void.

“Rosanna, please,” she replied, her slender fingers dropping from a steeple to brush away the nonsense of formality.

“Okay, Rosanna,” nodded Will. “Our mutual friend, the talking owl, has informed us you have a story to tell?”

Their hostess’ deeply lined face pulled into a soft chuckle, and Bunny couldn’t help but think that there’d likely been a time when droves of men had swooned over her smile.

“It happened a month ago,” began Rosanna, with a warm but firm tone. “I sleep lightly these days, and steps at the foot of my bed is enough to bring me awake like a rooster’s song.

“I was expecting it to be Curtis, but, oh, how I was wrong.

“There was a man – a baby face at forty, or a rugged gent at thirty-five. Either way, I’ve always been a sucker for a strong jaw and needy lips. I told myself I was likely dreaming, but somehow knew I wasn’t.

“Still, there was a burning between us from the moment I opened my eyes and I had no interest in denying it.

“I’m eighty-four, but a lifetime of hard work and harder play has left me strong. I’m in no danger of falling and breaking a hip or cracking a rib, and I knew exactly what his eyes had in mind. I’m not ashamed to say I invited him beneath the sheets, nor to divulge that I treated him like a rodeo bull.

“We were both sweating by the time dawn broke, but it was only because I had an early art gallery opening to attend to that I sent him away.”

Rosanna paused in her telling, and Will could read by the set of her knees, and the heat in her gaze, that she was briefly lost in memory – then she shrugged.

“He didn’t use the door when he departed. He climbed out my bedroom window, but I doubt he even required that much effort – there’s a twenty foot wall around the estate, as you no doubt saw when you entered – and he was gone by the time I pulled back the curtains.

”A couple of weeks later I received the note, and the photos. He must have had a tiny camera hidden in his crumpled heap of bedside clothing.

“The letter indicated a drop off point and warned me of what it would mean to my business and reputation if such images were leaked to the press. It wasn’t signed, but it smelled like him.”

“How did you respond?” asked Coffin, but Bunny already had the answer.

As Will had listened, his apprentice had been exploring the paintings and their inhabitants. Where he’d seen just canvas, she’d found a multitude of tiny lusting figures, each in a position that might have left the creator of the Kama Sutra blushing.

“That’s about right,” said Rosanna with a smirk. “I did not build an empire on rubber gaskets by lacking an understanding of rough business. It wasn’t the amount though, it was the notion. I’ll plow a thousand miles for a carrot, but I won’t budge an inch for the stick, and that’s the way it’s always been.

“I sent a note implying that my dating life could use the exposure. I kept the pictures though – I looked good in them, and so did he.

“That was the last I heard of the matter until a few nights ago when a ragamuffin named Pendleton came by and asked that I join together with a few of his other clients in turning the tables on my visitor. I refused his offer too.”

Coffin did not mention the corpses he had recently swam with – instead he simply gave a second nod, tucked his fingers into his pockets, and said, “thank you for your honesty. It seems we have an incubus with a money problem to locate.”

As his feet chased his racing thoughts towards the exit, it was his accomplice who thought to turn and shake hands.

In that lingering moment, Rosanna asked, “if you do find him, will you pass on that I would consider negotiating? I won’t pay his blackmail, but I’d gladly hire him to the house staff at twice the price.”

Bunny’s mind struggled under the weight of four damp cadavers, but she’d come to like Rosanna.

She said, “sure,” then left before the lie could linger.