Tonight we find ourselves locked into a conversation with a vagrant as our urban shaman, Coffin, his apprentice, Bunny, and perhaps even the creeping dead, watch on.

Bunny was finding some hours better than others, but it was cold outside and her denim jacket felt like little more than a pair of pasties as the north wind elbowed its way along Capital City’s sidewalks.

She’d been trailing her shaman roommate, Will, to Czech It Out, a West Slavic restaurant that was actually better known for its broad red-brick patio than its menu. The fact that her tongue had regained the ability to taste a palette beyond fried and salted items was one of the few comforts she’d been able to latch onto since finding sobriety, and she was determined to fill her time with new tastes even if she had to sit at the tiny interior tables the place used in the winter.

They’d just stepped off the bus, a block from their destination, when Bunny had begun to seek something to focus on other than the approaching woman. 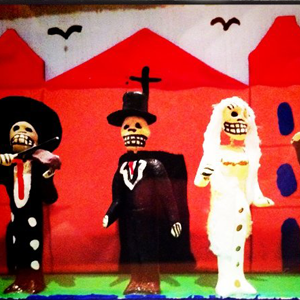 The lower quarter of her beige raincoat was covered in a spray of mucky snow, and her legs, beneath, were lost in layers of faded jogging pants. The frayed sweater collars that were visible behind her jacket’s missing top button seemed to have been selected from similar running sets, but not the same ones.

If she asked for some change, Bunny decided, she’d give it to her – but the nouveau gourmand knew that if she could get away with looking like she hadn’t noticed the thickly-lined eyes and trembling fingers she gladly would.

Then the story had come in a relieved rush, and Coffin had done nothing to stop it.

“I was coming out of the McDonald’s,” said the woman, “and I noticed him in the crowd crossing at the walk. It’s nothing but waves of people rolling back and forth, like the tide, down by the mall, but I couldn’t miss him. He looked surprised. I’ve never seen anyone so wide eyed. Scared too, like he’d watched someone kill his dog and he wasn’t sure if he was next.”

The chronicler – who, upon a further inspection, appeared to be a rough-worn forty and not the sixty Bunny had originally guessed – stopped her high energy recital and turned a full circle, scanning the distant sidewalks and slush-heavy road.

With the stranger’s back turned, the hungry ebriate tossed her roommate a questioning brow, but Will simply pushed the the black leather that made up his office’s uniform into a shrug. Every one of his multitude of zippers was as tightly shut as possible, but she could tell from his stance that it was his intention to wait the newcomer out.

However, she’d also just seen him thumbing a rare message into his cheap phone, and, together, the two actions convinced Bunny that he knew something she didn’t.

Squinting, she did her best to find warmth at the bottom of her shallow pockets.

The woman continued. “It startled me because, even though he was on the other side of the crosswalk he was staring right at me. I don’t have much to spare for clothes lately, so sometimes people judge, but it wasn’t a look like that. It was like he recognized me. It was like I’d done something.

“My first thought is to turn back and go inside, but then the light changed and the messenger bags and the briefcases were coming at me and I felt like he was in the swarm somewhere, getting closer.

“I started walking away, towards downtown. Fast. My legs ache fierce on a day like this, but I can still jackrabbit when I want to.

“Three blocks down I ducked into a Whole Foods to catch my breath and get some warmth in my toes. A clean cut college kid started following me around though. I know I’m not the the type that’s supposed to in there, but I explained that when it’s cold, it’s cold. He blushed, but he still told me to leave.

“I turned to go, though, and there was the scared man, standing on the far side of all the organic meats behind the butcher’s glass display. His face was terrified. Ugly terrified. His chin was low and he was screaming without noise and every part of him was trying to pull away, like he was at a rollercoaster drop and realizing he hadn’t done up his seatbelt.

“That’s not the worst of it though. It was as if an invisible giant had placed the palm of their hand against the little bit of bone at the top of his nose and started pushing. His skull hadn’t shattered, exactly, but it had buckled and bent, causing him to stare in two different directions.

“I’m not a drinker, or I try not to be, but that was too much for me. I bolted and didn’t look at anything but my feet till I was digging out my change bag to pay for a bottle of Bacardi.”

The tale drifted into the wind as the haunted woman’s gaze settled on a form on the horizon.

Bunny was nearly convinced the figure would be carrying the smashed features of the story, but, when he finally turned from the door through which he’d apparently exited, he was no more damaged than a mild case of acne that any sixteen-year-old might carry.

As the distant boy was joined by a friend in a puffy black parka the storyteller found her thread.

“I couldn’t drown the ghost, though I tried pretty hard. If I kept moving it wasn’t so bad, I’d see him in the reflections of shop windows or across the subway platform, but when I stopped he’d creep as close as he could. Sometimes I get distracted, and I think he knew it, ‘cause he’d wait until I was lost in a bit of news scrolling across an on-sale big screen TV or checking an outdoor ashtray for leftovers, and he’d step up right between my shoulder blades.

“You can’t hear him, but you can – you can hear his lack of noise, if that makes sense. You can hear the emptiness on your neck.

“Your ears tingle with the nothing.

“I – my memory plays tricks on me a lot, but I remembered your bench. Your benches. Your stores. Your offices. Whatever you want to call them. It took me a long time to figure how to get to there, and they were both gone when I arrived.

“That’s why I’m so glad to have bumped into you like this. He’s – I think he’s right behind me. I think he knows we’re talking and he’s hiding in my shadow.

“It’s worse now. I mean, it’s been getting worse the whole while. His face is coming apart. He – he had blue eyes, but they’ve both popped. Shards of bone are pushing through brain and the yellow fat beneath his skin – I don’t even know that he means me harm, but just looking at him…”

A braying laugh came from the teens, who were now waiting out the crossing light some ten feet off. The leftmost, in the puffy parka, seemed embarrassed that they’d been noticed, but the other, the first they’d seen, gave the trio a broad smile and an invitation to make something of it.

Bunny turned from the wet cheeked woman to the worn lines on her partner’s face then to her own cracked Doc Martens.

“Hey, you grimy mouthed dog-ball juggler,” she said to the lingering grinner, “clear the f##k out or I’ll lodge my boot so deep in your d##k hole you’ll be pissing polish.”

As they watched the boys retreat into a welcomed change of lights, Will cleared his throat and asked, “Georgiana, do you remember why you know where I used to set up shop?”

The woman’s pale lips flushed. “No, I’m sorry, I know – I know you’re sort of a sorcerer or something, but my mind is full of holes these days and sometimes things slip away. Honestly, I don’t even really recall how I know you are who you are, I just do.”

Coffin nodded. “Do you remember Donna?”

Her tongue said, “I’d have to see her,” but her wrinkled forehead said “no.”

“I’ve already, uh, summoned her,” continued Will. “The last few times you were here we learned that I’m just not powerful enough to help you. Donna’s talents, though, are greater than my own.”

As if on command, a Volkswagen Jetta pulled tight around the corner and came to a stop along the damp curb. Its driver, Donna, exited, her thick and wavy halo of hair silhouetting her features against the street’s gleam of ice and white frost.

A nod from Coffin was enough to convince Georgiana towards the passenger seat, and the shaman exchanged nothing more than a silent wave with the newcomer before the illegal parking maneuver ended and the pair pulled away into traffic.

“What kind of magic man bulls##t was that?” asked Bunny. “Who was she and when the f##k have you ever not gotten your g#dd##n Egon Spengler on and busted some ghosts?”

Will chewed at this thumbnail, then replied, “Georgiana had been with her husband for nearly twenty years before the accident. Nice couple, no children but a lot of love for each other. Apparently collecting old radios was their big hobby. It was a head-on coming back from a swap meet. She got cracked up pretty badly too; plenty of brain damage but most of the insurance money went to getting her legs stapled together enough to allow her walk again.”

“She doesn’t remember anything from before?”

“Sometimes, sometimes not. I think it’s the crash, in slow motion, that she’s seeing play out. I take the time to listen when she finds me, because a friendly ear beats a blade when fighting fear, and Donna, her social worker, appreciates the calm when she arrives.

“Respect is all the comfort I can offer, though. We’re not equipped to exorcise spooks that solely exist in someone’s head.”

Blowing heat into her numb fingers, and coming to the surprising realization that she regretted not having a chance to invite Georgiana along, Bunny pushed her feet towards the restaurant.

The cup jiggling man she passed along the way was terrified at the sheer force of her eye contact, but he gladly accepted the fiver she tossed on top of his collection of change.

By then she was only feeling hungry enough for soup anyhow.