This week’s episodes are brought to you by The Forum

Tonight we attempt to survive another encounter on the streets of Capital City alongside our hero, Harm Carter, a victim of the homicidal paranoia that infects the city’s inhabitants.

Let’s talk, for a moment, about gunfights – and, more specifically, about gunfights at a time when a solid portion of the population has been infected in such a way as to think they’re the new Gary Cooper in town.

In my more adventurous years, as a young man on foreign soil, I’d occasionally found myself firing the rifles Uncle Sam kept handing me. I have never been a master shot, but, honestly, the technique we employed in dispensing ammunition across the countryside was often more a matter of statistics than precision.

All that to say: Even before Hitchcock’s disease convinced every grandmother to hide a revolver in her purse and every Saturday hunter that he should find a bell tower to climb, I’d already survived the lottery that is the high-velocity exchange of projectiles on more than one occasion.

Even then, I recall, a week or two into my own madness, encountering a darkened baseball diamond. Nothing overwrought, just a neighourhood lot with a chain-link backstop, two benches, a plywood concession stand, and a playground set off to the side to keep the local softball team’s kids entertained while they were swinging bats.

A cargo truck had been stationed in the outfield, and a tall-legged canvas tent had collapsed onto second base. Bottles of water waited on open palettes, and a stack of folding chairs sat, un-deployed, not far from the vehicle.

The scene rang of an aborted attempt at a governmental emergency response. Perhaps they’d tried setting up an evacuation point – I couldn’t tell what had happened to disappear all involved, but there was definitely a feeling as if the hulking rig had been vacated with haste, like a landlocked Mary Celeste. 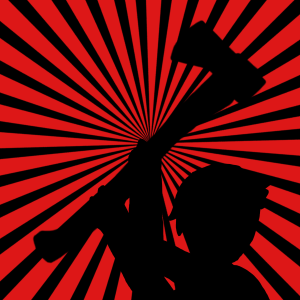 In search of supplies, I’d been crawling along the garden path between a two-car garage and a bungalow that’d had every one of its windows thoroughly shattered. I remember thinking the fluttering of the lace curtains blown through the living room’s missing bay window quite beautiful as I sat watching for any movement in, or across from, the park.

Feeding yourself when all is paranoia is a tricky matter. I’d spent the previous weeks stepping into booby traps, and there was no greater bait than the rations I suspected were abandoned to the feral grass.

Still, my stomach’s rumbling was a persuasive counter-argument, so the debate lasted a surprising while.

An hour into my vigil a cloud bank fought the moon for dominance of the sky, and my brain chemistry shifted from wait to run. Stooping low, I sprinted, full-tilt, from my location to the shelter of the metal bumpers lining the diamond’s car-less gravel lot, then along the wooden outfield fence and into the relief camp’s shadow.

From that distance I could see more signs of sudden passage – papers spread around the disordered turf and medical paraphernalia toppled near the thick rubber tires – but I could also make out the flat brown packaging that indicated a stack of MREs in the rear of the flatbed.

Things were going really well until I stepped onto the back of the truck.

The two-story houses on the far side of home plate all looked to have been picked from the same catalogue. Most were undamaged, and each one sported equally dark windows and closed garages at the end of paved driveways.

From the second floor of the third home from the right, however, a blinking light of death took to looking for me. Someone was waving a silenced automatic weapon in my direction.

Muzzle flash wasn’t my only sign of danger, though: The exploding bottles of water to my right were also a pretty good indication. I went over the truck’s side backwards, like a Navy diver enters the drink, but I landed like a drunken albatross in high wind.

Yet there was no chance to complain about my injured spine, as the winking flare was already busy conducting heavy duty body-work on the Army’s chariot.

Now, I wasn’t without my own means, but I was as well off chucking rocks at that distance as I was using a pistol. That did not stop me, however, from pulling my automatic from its pocket and making the first noises of the night.

At the least, I figured some excitement in the shooter’s direction would do little to steady their aim.

While throwing away my bullets, I ran. I hustled past the guest team’s bench, the surface splintering under the flicker, and made a dive for the concession stand.

There was definitely a proper door to the shack, but it was around back and I didn’t have the time. Instead, I plunged head long into the large hinged flap that would normally be pinned up to indicate the stand was open for business, hoping all the while that it wasn’t locked.

It was definitely locked.

The panic in my feet was such, though, that it didn’t really matter. The spinning slats of wood they rotated into place to hold the sheet down snapped under my impact, and the hatch gave way far enough to deposit me firmly on the cement slab that made up the floor.

There were two people already sheltering inside.

The man was maybe twenty-five. His hair had been close-cropped at some point, but it’d been quite a while since he’d seen a razor. He was dressed in jeans and a dark blue t-shirt, but I could have easily pictured him in a uniform before the collapse set in. She was maybe eighteen, wearing black stretch pants, a thick gray sweater, and a ponytail that seemed to bounce in defiance of the misery around her.

When I think on that moment I’m always slightly relieved I didn’t kill them, but, honestly, if I hadn’t emptied my weapon ahead of my arrival I’d likely have done exactly what the disease insisted.

They ran then, out the door I hadn’t used. There was a half eaten sandwich on the ground, a small guttering candle, and a harness with three grenades strung across it.

I didn’t wonder, then, how the pair had managed to stick together without murdering each other. I did wonder how anyone could possibly forget such useful equipment when departing, but I was too far distant from ordinary human perspective to understand that sort of surprise anymore.

Whatever the case, I stopped consideration of the matter twenty feet into their escape, when the fellow’s head blossomed three red stitches.

The woman did not pause, but she did scream as she doubled her speed and disappeared between a white Escalade and a maroon Mini Cooper across the way.

There must have been more twinkling from the second floor rifleman, as the SUV’s rear window shattered, but the block settled into silence once the runner was safely in the shadows.

I was left to wait and consider.

It’s hard to know where my will to survive stopped and the disease began. I obsessed about the grenades – how I might use them to defeat the deadly light blinking in the distance – but, the truth was, there was no hope I could cover the ground and remain free of some copper and lead marbling. My logical mind won that argument at least.

My brain worked every corner, rattling every scrap of material I had at hand, but there’s the reality of combat in a nutshell: It’s good to be fast, and it’s good to be accurate, but it’s not always enough.

In the end the madness decided on making a run for the truck. I can see now that I would have been just as dead as the t-shirted lad no further than ten yards from my shelter, but there was a strange commonality between the Murder Plague and being a contestant on Jeopardy. Tension makes the solution harder to see, and there is a constant need to do something. Sometimes that meant anything.

Loading another clip into my marble thrower, I did my best to steady my hand, and stood.

As I’ve said, there’s too much randomness in a firefight for my liking, but there are some rules that seem to hold. One is that chucking bullets will lead to bullets being chucked back at you. This scales all the way from a small bank robbery to the invasion of a Middle Eastern nation. If you’re going to do unto others you either have to massacre them all or accept the same kindness.

Even as I pulled back the hatch and let fly with my peashooter, the blinking became a brief nova, then portions of shredded flower-print curtain and beige house-siding began to rain across the lawn.

Deciding that was the perfect time to shop, I beelined to the brown bags, grabbed a double armful, and made for the same garden path that’d brought me there.

I’m glad I never came across the girl again. I suspect – no, I believe – that she acted out of revenge, meaning she wasn’t sick but a simple, angry, innocent. I’m also not sure I would have survived a second encounter: Even sane she’d thought to do what her lover hadn’t, bring some grenades.