Category Archives: Letter to My Kids

I’m talking about my dad – I know you never had a chance to meet him, his accident robbed us all of a lot of time, but that just means I have to work a little harder to bridge the gap.

His name was Rockwell, though most called him Rocky, and if your own pa has a twisted sense of cosmic justice you can perhaps blame him for it.

I worked this into a story at one point, so if you’re hearing it twice, well, too bad. Sit down and listen, I’m your father dammit.

Now, I have to admit, this isn’t even my memory of the incident, which happened three decades ago. This is a story I believe I picked up from one of your great uncles, and, though I love them all, they can be the best (and worst) sort of tale spinners.

Still, let me tell you about the Springer Spaniel we had when I was a kid, and a lesson both about being kind and what assumptions will land you.

See, there was this hooligan in the neighbourhood – for the sake of this conversation we’ll call him Kris, because that was his name – and he was one of those mooks who could smile like an angel while holding a dead baby behind his back.

We were summer friends, or, more specifically, his sister and I were – he was older than us both by a few years, and bored easily of our childish tree forts and treasure hunts. He had bigger game in mind. 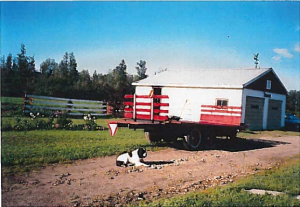 You’ve got to understand, however, that this was the 1980s, and things were a little different back then. Dad had grown up on a farm, and, as you know from visiting your Memere, the hamlet I was raised in is a small town where everyone mostly minds their own business. Outside dogs were common, and this beloved Spaniel was originally bought, I believe, to help Dad in retrieving the ducks he hunted.

Beyond that the mutt’s life was largely spent gorging himself while chained up in the backyard and pacing a large half-circle into the grass or napping in the shade of his dog house.

I loved that beast, and argued on occasion to let him be allowed inside, but he was a shaggy monster with a barbarian’s manners and Mom knew it.

One day however, Kris got to testing the boundaries of the canine’s captivity.

Now, as I recall it, the dog had never been particularly fond of the punk. Years later I found him to be a nice guy, but, for whatever reason, Kris was a miserable kid.

Realizing it was possible to safely stand at the very edge of the worn groove that marked the boundary of the dog’s territory, the tiny tormentor wandered about the yard in search of a thick branch (as his sister and I likely chased imagined fairies through the trees.)

With the sort of snide disregard for life that only a child can muster, Kris began mocking the dog – and when the poor mutt came close enough to be in range, he swung his club. This, of course, did little for the animal’s mood.

Eventually Dad came out – he might have been working nights at that point, which meant a midday kerfuffle wouldn’t do much for his mood – yet the tormentor was quick to hide his weapon and claim innocence.

You’ll find though, as you get older, that those sorts of bullies aren’t content to stop with a near miss.

The second time it happened, a few days later, I suspect Dad simply hung back and watched things play out, presenting himself just long enough to break up the action once he knew what was going on. I seem to recall shouting at Kris myself, but every memory is suspect thirty years on.

The third time was the last time it happened.

You’ve got to understand two things: The dog had come to hate that kid. He was perhaps the friendliest mutt I have ever encountered, but he knew his tormentor on sight.

The other thing is that the combination of time and the chain that held him had left his captive space clearly defined as a dirt patch where the grass didn’t grow. Knowing exactly where the leash ended meant the child could safely mock from a distance.

On that last day, Kris stood just beyond the line, stick in hand, and called to the dog. The mutt refused to come out from the shade of his house. Kris threw a rock. The dog growled. The boy chuckled.

Moving at a dead run, the beast bolted from his home, and the child, thinking the fun had begun, raised his timber.

What Kris could not have known, however, was that you are the descendants of a long line of smart asses.

Dad had moved the post holding his hunting dog’s chain up a foot.

I can’t say for sure that the pee-stained pants I was told about are a true memory, but I have no doubt Kris would recall if I could find him to ask. Given the terror of the situation, I sometimes wonder if he still dreams of the incident.

He escaped without injury, but that was the last time he ever raised a stick to your grandfather’s dog.

Love you all,
Dad

Filed under Letter to My Kids