This week’s episodes are brought to you by Chrononaut Cinema Reviews!

Tonight, we cross and re-cross the Canadian wilderness, as if an echo of another time.

Elizabeth Blackhall had been snatched from the London social scene at the height of her marriageability. She had boarded a ship at her father’s summons not because he asked, but because he’d signed her mother’s name as well, in exactly her mother’s script, and she knew that his constant search for obscure mysteries had either lead to the sort of extreme drunkenness ascribed to the peoples of Lower Canada, or some infection of mind or body had overcome his sanity.

She had planned for a trip no longer than necessary to retrieve her aging progenitor, and had maintained this notion at the forefront of her mind as her ship pushed down the icy St. Lawrence, past the Quebec’s grim ramparts and into the increasingly shabby wilderness. 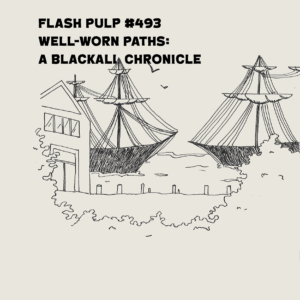 In time she came to another supposed city, Cornwall, which seemed little more than an expanse of industrial grime smeared across the shoreside for six dozen paces, but she would also, at that point, willingly confess that the site of so much unkempt land had, since their entrance through the mouth of the river, frayed her sense of a speedy endeavour. Everything here seemed named after some point she had rather be visiting, but, despite her years of separation from their firm gazes, she remained her parents’ daughter and did not hesitate when stepping down onto the splinter-planked dock.

This had been a military camp once. Her father could not help but riddle his letters with such digressions, filling the pages with the things he’d learned rather than what she’d like to hear – of his own health and undertakings.

Well, the last post, traceable to this same shabby port, was clear enough sign of his wellbeing.

She had written ahead in preparation, a friend having unexpectedly suggested a man he knew, Smith, of unlikely integrity for such a rough and tumble backwater, and the two-masted trader that had carried her proposed-guide’s acceptance had been chased down the river by December’s final freeze.

It was only now, with April still blowing cold winds and but a worn-mariner’s promise that the ice would be broken up by the time of her arrival, that she’d risked the transatlantic journey.

Her guide’s instructions had been worryingly vague, but each point seemed to prove out true as she worked through them:

“Come the spring there are endless lads along the docks looking to pinch what they might from the first crews of the season, before the codgers have grown tired of their begging young faces. Offer one of the ragamuffins a coin and lay the moniker of Smith upon his ears, if he should answer with my given name toss him the copper and be patient for my appearance.”

The selection of scamps was plentiful, as predicted, and “Montgomery” soon came back as a reply. Within moments she had been collected, and within hours she was on the road north, such as it was.

While Elizabeth chafed at her supposed chaperone’s constant concern for her well being, a brief incident that evening, outside a squat hotel in the rural town of Ottawa, put a rest to his anxieties. Though she had worn the crinolines and bodices of a socialite in search of a matrimonial match, her bloodline’s history of strong stomachs and rebellious actions had long ago taken deep hold of her body and mind. She was as likely, her friends would confess, to be found tossing dice in some rat-infested warren as sweeping through the figures of a quadrille in a grand ballroom.

It was a ruffian sporting a deer-hide jacket and leggings who initiated the episode. At the sight of the pair of wary travellers mounting the steps to their place of rest, the man had, in a slurred bur, snatched the coonskin cap from his head, and began to declare his love.

“Rarely has such a fine sight crept across my vision,” he’d begun, and Elizabeth let slip a roll of her eyes that made clear her lack of interest.

Instead of backing down, however, the man reached out his left hand, grasping her forearm even as he pressed the dead raccoon to his heart in a profession of desire.

Three things happened at once: His friend, equally drunk but clearer of mind, set his palm upon his lusty companion’s shoulder and called for calm; Montgomery, reaching within the simple black wool jacket that kept away the cold of the road, produced a pistol; and, Elizabeth’s slender hand touched the thin-cuffed sleeve in his grasp. A blade had appeared in her long fingers, and its tip swept across the intruder’s hat.

All four watched as the ringed tail fell free of its owner’s headgear and drifted to the ground.

Blackhall’s voice was light but even as she spoke. “Unhand me, sir, or it will be your own tail next.”

At the words Smith’s weapon disappeared into a deep pocket, and they were shortly after resting comfortably in their rented rooms.

So it was that, unified in purpose, the remainder of the journey, first upon horseback and then within a shallow-drafted boat creeping across lake and river, moved swiftly and without complication beyond the usual bug bites and threat of wildlife that all marching into the north encountered.

There the trouble truly began.

It was a surprise to discover her father was not mad. Her traveling companion had, on occasion, provided tales of their time together, mostly revolving around the small settlement towards which they’d journeyed, but he admitted freely that Blackhall Senior had kept many secrets and rarely explained his motivations. She had attributed Smith’s lack of willingness to confess to her father’s madness as a sign of his respect.

It was a greater surprise to discover that her mother had returned from the dead.

For a year the dutiful daughter maintained this improbable life, but Blackhalls are hard pressed to live by the rules of another, even of their own blood. In time the novelty of her mother’s return faded and the old rhythms of their relationship, though now heavily imbued with mysticism and a great work they refused to discuss with her, fell back into place.

Elizabeth was a woman now, however, and her parents, distracted with whatever matters had called them to establish this shabby lake-side settlement, had little time or patience for the priorities of a bird used to flying free.

On a quiet May night, with snow still lingering in the deepest shade, she wrote two letters of affection to her dearest friends: Montgomery, who she referred to her as her beloved uncle, and Mother Gran, the hard-knuckled ancient who maintained both supplies and law within the growing village while Thomas and Mairi worked at their hidden plans.

She wrote no note to her busy parents. They had had opportunity enough to hear her reasons.

It was her father, however, who found her, two weeks later, nearly starved and her left leg shattered.

“The thick Canadian weald is no place for an amateur to attempt self-schooling in bushcraft,” he’d said, as if just another aside in one of his dispatches, then he’d bent low to kiss her forehead and gauge her wound.

Once healed she spent the intervening year in cultivating just such an education.

On her second attempt she’d made it as far as the Cornwallian docks when she spotted Smith. He’d deduced she’d use a familiar port, but his rush to intercept her flight had cost him a black eye at a bandit’s hand and a rasping cough that drained all palour from his face.

Concern for her clever friend, especially as he fell into fever, meant turning back once again – this time to escort the sickly man to the untender mercies of Gran’s medicinal knowledge. Upon this journey, however, Elizabeth swore off leaving any further notes, suspecting that the tip off had been how Montgomery had gotten his start.

When Uncle Monty was sufficiently recovered she announced a fishing trip she would be undertaking, alone, and then departed a third and final time on a rose-dusted June morning.

She’d made it a mile into the thick southern woods when she caught sight of a glowing beacon. Unable to shake the curiosity of her progenitors, Elizabeth had pressed towards its source.

There she came upon a clearing where thin black fingers rose through the spring grass in memoriam of some long-past forest fire. At the meadow’s center stood her mother, Mairi. The dead woman, her appearance oddly stitched and not quite human since her resurrection, blazed with a sourceless light.

“You are right to have complained,” she said, her voice carrying across the green carpet as if her blue lips were brushing Elizabeth’s ear. “There were matters that required our attention here, and here alone, yet you have been heard. Your father – he’s too proud to say it, but he has only a few years left. If you will come with us of free will we will find a home where your needs are met, as are ours, and where we can share some brief span together again as a family.”

So it was that the Blackhall’s settled, for a time, in Capital City, with a history of rebellious daughters facing the Canadian wilds, undaunted, already well established.