Tonight we present Censors: a Collective Detective Chronicle, Part 2 of 3

Tonight we re-join one of the Collective’s investigators, Maritza “MarMar” Mercado, follows a too-bloody, too-naked, trail of digital breadcrumbs.

Staring down the gray boxes of the Collective Detective’s sprawling archive, Maritza considered what she knew: The company her mother had worked for, AssignMe, and the brief window of two months in which she had been employed.

It wasn’t much to go on, but “solving mysteries with no more than a ghost’s whisper is what the Collective does,” was a regular refrain from her friend and fellow contributor, Harrisment, and she knew a witness statement was far more than most cases they undertook began with.

Besides, it wasn’t a lack that was generally the problem: She considered working with the Collective like being a marble sculptor – the shape of the solution lay in the data, but it was up to her to shave away the excess surrounding it.

She started, as always, with every bit of traffic transmitted across the NSA’s snoop servers over the course of several years.

Adjusting her timeline to cover the summer in question, MarMar did a simple search for the company’s website traffic. The engine began to chug away, retrieving logs and doing its best to feed it back to her via interfaces that would help make some sense of the flood. Webpages were a well-maintained protocol among the collective’s users, but she knew if the management system the company had used was custom she might be bogged down in having to reverse engineer the software necessary to display the stream of information.

Casting a hopeful glance at Ziggy Stardust, pinned on poster paper to her wall, she rummaged in her desk drawer for a piece of gum and ignored the possibility of tedium on the horizon.

The site provided email addresses – another protocol the project easily understood, its unencrypted nature making it especially easy to track. Attached to the requests for time off, excuses for late arrivals, and complaints regarding broken vending machines was the IP data for the facility. From there it took very little prodding to block out a decent range that encompassed everything traveling the company’s wires.

She exhaled with a grin: The interface AssignMe had used to filter and tag offenders was all web-based, and, better yet, included individual usernames that were automatically rolled over into timesheets to determine how much the operators were owed on payday.

There were dozens of Mercados in the database, but only one Alaiza whose records began and abruptly ended during the window in question.

There was no result for a Thick Jim, however.

Again MarMar narrowed her search, this time coming back with what her mind considered a single unbroken thread of data.

Here her work truly began. She could not ask the computer to filter the job further, she would have to flip through the feed and identify the clues by hand.

Still, it was a filthy river to be fishing in. College could be a lonely place, and she was not unacquainted with the occasional naughty picture, but the depths of depravity that unwound themselves from her laptop’s too-bright screen left her wanting another shower and a walk along empty streets.

Six hours into her scrolling, with her bladder in increasing need of a break and her brain demanding coffee, she came across the image. It was not the first photograph mentioned in her mother’s letter – perhaps she’d blinked in her endless examination and somehow missed it. Here, instead, was the white chair, just as it had been described, and the axe handle apparently propping up the anonymous woman whose purple flank was turned away from the camera but all too visible against the gray pallor of her naked flesh. 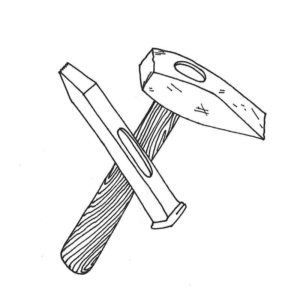 The name associated with the account was not Thick Jim, but Maritza’s time with the Collective had taught her that such tricks of memory were common. If anything, it was impressive that her mother, fifteen years after the incident, had retained Stout James as Thick Jim.

That info brought up the shot she’d missed, and the one she had yet to reach. Having chiseled out the final nuggets, she almost regretted her success. She could understand how the first portrait had been missed: Its oddities were obvious to her, but only in retrospect, which, if she were honest, actually bolstered her respect of her mother’s perceptive nature. All too often it had worked against her during her youthful days of mischief, but now she realized the woman might have a knack for work among her fellow detectives.

As unnerving as it was, however, it was the next phase that flushed MarMar’s sense of victory, replacing it instead with goosebumps across her forearms and a chill along her spine.

Somehow she’d hoped that it WAS in fact a screen-grab from some strange film, or some project by a special effects artist whose work had gotten out of hand – perhaps, even, some random weirdness passed between fetishists visiting sketchy forums. There was nothing on the internet, especially nothing fifteen years old, that remained unique. Any image, once uploaded and left to settle, would likely blossom into a hundred copies strewn across servers by, at the least, spambots and inexplicable enthusiasts.

Yet this trio of pictures, as exposed and lurid as they were, returned no results in a search for duplicates – had, in fact, no matches across the history of the entirety of the operating network as far as she could tell.

These were no fakes, these were no mock-ups. Her mother’s intuition had been correct, and now the daughter was left to consider the consequences.

She stood, gave Ziggy a nod, and shuffled towards the coffee grinder with heavy feet and a heavier head.

One Response to FP452 – Censors: a Collective Detective Chronicle, Part 2 of 3