Tonight we present Behind the Lines

This week’s episodes are brought to you by It Gets Weird!

Tonight we witness that time and distance do not liberate from death or fear.

Two thousand unwashed men had collected about the grassy meadow with rough-hewn swords, pikes, and hatchets in hand. For some coming to this moment had required the sacrifice of budding relationships, the severing of contracts, and the soothing of anxious parents.

All such stood in muddy boots, their feet firmly on the ground, their hands steady but slick with the nerves of coming battle. Some tugged at leathers or patches of chainmail, but many could not shake the doubt that their best defense would have been avoiding this place entirely.

It was only their leaders, clad in thick armour and riding chargers worth more than could be earned in a lifetime’s collection of crops, who moved with surety.

When the time came these officers would head-up the assault, and the lesser ranks destined to fall at their sides would at least do so with the knowledge that they who caused this war also lofted their weapons among the melee.

Still, beneath the reassuring weight of impenetrable iron, the masterminds felt concern but for the risk to their reputation and landholdings.

Two hundred years later came a moment of change. Upon a grassy plain not so different than those across which his bloodline had been marshalling troops for generations, a singular commander sat atop his mount, his steed – itself the apex of centuries of breeding – striding upon stout legs.

The beast was urged to walk the line of the general’s followers, and from his position of height it was easy to spot his opponent doing the same before his own forces.

“Today we beat back those brutes who raided our lands and slew our fathers -” he said, despite knowing his father was safely behind fortress walls many miles from the fighting. While the coaxing speech had remained the same for decades, however, the brutes of which he spoke had developed a new technique in the ancient scramble for dominance.

Beyond the grasses the brush parted, and a trio of wheeled monstrosities took the field. Curiosity brought a pause to the rallying recitation, and it was this brief halt which saved the noble’s life.

Fire touched the bases of the long bronze tubes, and the cannons fired.

Though the horseman would survive, he still bore witness to his stallion’s neck suddenly devoid of head, and to the splintering shot that shattered a swath of farmhands who had not had chance to ready their blades and bludgeons.

Crawling from beneath the dying mountain of meat and blood, it came into his mind – as it would for many more of his breed in the coming years – that he should perhaps lead from the rear, where he might better organize the complex formations necessary to face such a foe.

It was exactly that field, though centuries after the knightly age, that his people again realized the advantage of a more distant view.

Even as artillery fell upon the French front, their voices became nothing more than a remote crackle emanating from a rain-damaged radio. The theater of operation was large, they claimed, and there were so many crop tenders and factory workers, spread across thousands of miles of trenches, that it was impossible to coordinate such a puzzle from beneath the pressing demands and threatening clatter of tumbling shells.

Those same rattling explosions left little clarity in the fighters’ minds regarding why, beyond the dignity of their homes, they were conducting themselves through this mad venture – but it seemed just as suicidal to stay in place when the word “Advance!” came as a snarl along the wires.

Yet, even as the battle line marched forward, somehow its command crept backward, as it had done, in slow inches, since those early days on horseback.

A quiet man, with a round face and no knowledge of his family’s history as conquerors and commandants, would eventually sit in a small trailer-turned-office at the edge of a secluded airfield, his seat thickly pillowed and his fingers knowing only the trials of a slow day riding a keyboard.

No longer did his men wield pitchforks and crude steel. They too had come to understand the safety of distance, of having no foot upon the dirt when the fighting grew fierce, and, as such, they had taken to piloting death-dealers so removed that their narrow view seemed to show nothing more than the barren surface of an alien world.

Beneath their pinning gaze, however, still stood those with mud on their boots; beneath their flying weapons still stood the children of those who had always been summoned to action for reasons not entirely clear to their understanding.

For the commander there was no call to worry about such considerations. There was, in fact, little of anything to worry about here, thousands of miles from the sudden heat and sundered flesh of combat. 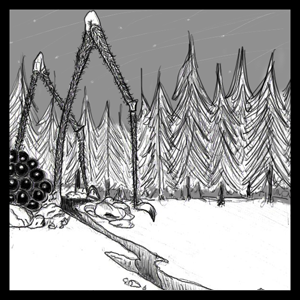 Yet, even as the soothing chime of another missive landing in his inbox shivered across his desk, the cushions upon which he sat began to tremble as if they knew sudden fear – as if, perhaps, the missiles he unleashed a half-globe away had finally returned to roost.

The dust upon his windowsill began to shift and take flight, and beyond the glass the rows of beige shacks, not so different than his own, began to heave. Though he’d hoped to keep mortality beyond the horizon, Kar’Wick the Spider-God recognized no nation’s borders as he split wide the earth and exposed a thousand fractal eyes.

Though the watcher had planned to live so far from death that he had only to fear a slow collapse into his own bed, that day all – be they upon the field of battle or at its most lonely edges – would know the terror that was the rise of the Arachnid Lord.