This week’s episodes are brought to you by Orphaned Entertainment!

Tonight Queen Sofia Esperon is summoned to a dragon-haunted corner of her kingdom.

Sofia Esperon, Queen of the Hundred Kingdoms, and Greater Things

There’d been an age when many corners of the Hundred Kingdoms smoked with the passage of dragons, but under royal decree, and with careful consideration, their population had been coaxed into a quiet cohabitation by Queen Sofia Esperon’s command.

It was with some surprise then that the small farming village of Tolspot, situated along the southern edge of the Sweetfield Peninsula, found itself within the shadow of a mighty wingspan early one spring morning.

A herdsman by the name of Phosmas was loitering at his meadow’s edge, feeding a stand of spruce his previous night’s wine, when the gloom fell. His head shifted skyward, expecting a persistent cloud, but instead he spotted the blue-black form of a soaring reptile.

With wet boots he’d collected his sheep and scurried to town.

Though his position, both societal and geographical, meant he was likely the first to have spotted its trajectory, Tolspot was afire with the news by the time he’d penned his beasts and achieved the square. The whispers he found there were a mix of fear and curiosity.

Mayor Slowfinger stood upon the low platform that acted as courthouse, stage, and altar, depending on the need of the day. Her arms were wide and her voice hushed.

“So it is that I’ve dispatched a rider to the capital,” she was saying. “We should have quick word, as we know the Queen takes such matters quite seriously. Still, it is three days ride, so it would be best that we remain vigilant and keep the cattle sheltered as best we can.”

Elida Weatherspout – her husband Toon at her side and their bairn, Malthus, in her hands – stepped forward and asked, “where could it have come from? Surely others have noticed the passage and the Queen’s Guard is already imminent?”

The Mayor shook her head in careful turns, but she waggled a finger at Old Man Ross, the hamlet’s living history, as an answer.

Ross cleared his throat with a papery cough and worked to have his words heard over the creak of his jaw.

“That’s Murk, as lively as I’ve ever seen him, I’d know that smudge upon the horizon even if Witch Martha hadn’t removed the canker from my eye last wintertide.”

“Murk?” replied Elida, “I thought the legends of the sky lord nothing more than spook tales told around the harvest fires to keep children from wandering too far into the wildwoods?”

Here then Phosmas found his opportunity to add to the debate.

“I believe it,” he said, “He was low over the treetops when he swept across my pasture, and I saw clearly the stump that marked the loss of his second head.”

In a previous age the Queen had demanded every such beast stand for inspection, and she had determined, with a steadier hand than any in her retinue, that though the right head seemed reasonable enough to be allowed to live, the left was not but animal and must be removed to curb the danger it posed.

Though many argued she should just slay the monster in its entirety and not risk a misstep, she had not made the decision without consideration: Many who had seen the dragon upon its raids had claimed the right argued endlessly with the left, and that the better half had even shouted warnings of its arrival to those villagers too deep in slumber or a whiskey jug to note its alighting.

Now, however, as the townsfolk stood and chattered beneath the rising sun, there was little more to do. None cared to approach Mount Tellmore, the sole peak in the area, and the storied home – and, until recently, assumed grave – of Murk.

The hunter appeared on the second evening, though none had witnessed Murk again since the surprise of the previous dawn.

He arrived upon a white horse laden with weaponry and leather. His saddle was hung with trophies – bear claws of extraordinary size, the shattered tip of a minotaur’s horn, the ears of a jackalope – and his sword was bejewelled and well-honed.

“I have come to stalk the beast!” the stranger told all who approached.

Phosmas thought he looked rather sharp atop his charger, truly a grand addition to any spring rites parade, but he could not bring his mind to lineup the glittering appearance of the man’s breeches and boots with the blood and mud he associated with local deerstalkers.

“You’ve come from the Queen?” asked Mayor Slowfinger, once the newcomer’s gathering procession had arrived at the center of town. “Where is Erwin?”

“I am Hans Grizmore, though most know me as Hans the Hunter. I met your Erwin upon his long ride, and your plea brought pity to my heart. This monster will taste my blade the same as the Lord of the Maze, a bovine beast I encountered along the northern coast -”

His tale stretched into greater theatrics from there, and by nightfall all who had remained to listen were tipsy with their own hospitality.

At dawn Grizmore rode out, his load reduced to only that which he might need for the journey to the mountain top. By dusk he had returned, and his equipment finally held some aspect of what Phosmas knew of hunting.

The outsider carried Murk’s skull strung from his stallion’s tack, and he displayed it with pride as he dismounted before the inn and accepted an offered tankard of mead. Though the Mayor frowned at his approach – just as she had when her insistence that he not ride out had been ignored – those same revellers who’d seen him off welcomed his reappearance with gusto, and an unexpected and unsanctioned celebration broke forth. At its peak Hans stood astride the square’s stage, his spoils at his feet, and the Widow Seen’s paintbrush capturing his image upon her canvas.

The revelry lasted two days, yet on the third morning milky-eyed goblins were caught in the Weatherspouts’ dooryard, and little Malthus was in their hands. Only Elida’s quick work with the farm’s wood splitting ax saved the bairn from a stewpot.

Panic worked its way through the streets and across the hedgerows, and soon more sightings were collected: The Millthorn’s goats were missing, unknown assailants had spent a terrifying night battering the buttoned windows and tightly cinched doors of the Ghorbani homestead, and the Bekele’s barn had been set afire as the cackles of the hidden men – the local name for the cursed goblins that legend claimed had once inhabited the area – could be heard over the cluck and moan of fearful livestock.

Calling all from field and hill, Mayor Slowfinger had declared an emergency upon the land, and demanded all able should stand guard at the town’s borders while those unable should sleep within the safety of its walls.

It was as the residence of Tolspot fashioned pikes and armed themselves with kitchen cutlery that the Mayor stopped Hans from making his exit. 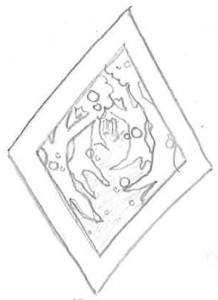 “My job is done, and it’s clear you’re now occupied, so it’s best I be about my way. I am, afterall, a hunter and not a soldier.”

“You’re not even that,” replied Slowfinger, “you’re a trophy collector. That said, stay and raise your sword for the barricade or it’ll be my own blade that takes YOUR head for a prize.”

Perhaps it was the strength of the woman’s words, perhaps it was the many eyes who watched the exchange – and the risk to his reputation those observers entailed – but, whatever the case, Grizmore turned back towards the inn.

What followed was a night and day of siege. Flasks of looted wine were set aflame and cast into the villagers’ midst, barns were burnt and cattle slaughtered, and knobby arrows rained from the darkness, chased by cackling laughter. Worse yet, for every casualty the beleaguered citizens inflicted it seemed five more toothy faces appeared to challenge the bulwark.

Finally, unslept and with their food supplies dwindling at their lack of access to crops and root cellars, the gathered defenders turned to formulating a plan to abandon their homes and attempt to escape the now seemingly endless tide.

With tears on their cheeks and memories of sunnier days in mind, they began to collect what they could – and that is when they heard the horns.

Queen Sofia Esperon had not come with the intention of combat, but it was rare, in this late day of her reign, that she went anywhere within her Hundred Kingdoms without her weapon at her side and her Guard close at hand.

Surprises were simply too common along the road, even in such a peaceful era.

She did not sully her blade, however. The rumble of a dozen warbears, their coats close cropped and their harnesses glittering in the sun, echoed along the valley, and the beasts fell upon those of the imps too slow in retreating.

Yet it was not the invaders who received the worst of her wrath.

“You again, Hans?” she asked, once the townsfolks’ greetings and thanks had been established.

For the first time since Grizmore’s arrival, Phasmos noted the man was quiet – he had, in fact, taken to apparently sheltering behind the dirt-laden forms of the Weatherspouts, though Elida and Toon seemed to have taken the greater brunt of the messy work of defense.

The hunter stepped forward and took to one knee before his ruler.

“Yes, your highness, I arrived to save you the work of slaying the dragon Murk, though he was clearly not the only threat that beset these lands. It seems this place is cursed. Surely this must all be the work of some foul mystic?”

“No,” replied Sofia, “it is but the work of one idiot. A true hunter – one that needs fur for heat, meat for winter jerky, and the bones for their summer stew – knows the consequences of cutting too deep, of culling too far.

“It is no coincidence that the flood followed your pulling of the plug that had held them in place. I had wrought a deal with the beast, decades ago, that he would scrounge his meals only from the tunnels at the rear of his cave, where the undermountain goblins plot endlessly and refuse all treaties.

“Now the balance has been offset. You will help correct it. No longer, however, will you be Hans the Hunter. Today you begin new duties, under a new name. We will build you a gate, and you will be sure it remains shut – as shut as your damned mouth if you know what’s good for you.”

It took only a week to close off the hole in Mount Tellmore, yet it was but the beginning of a lifetime of work for Grizmore the Doorman.