This week’s episodes are brought to you by the Melting Potcast!

Tonight, with perhaps the faintest bit of a smirk and a dash of fanservice, we revisit the worst Actual Psychic Cop on the Capital City police force.

Tony Dibbs, Actual Psychic Cop, was standing in a QwickMart aisle, beside a wall of potato chips, doing mental math.

Was it worth stopping the sixteen-year-old shoplifter currently scooping ring pops into his pockets as the counter jockey shouted lottery numbers into the phone?

He knew by instinct that it was not, but Tony hated to let an opportunity pass unexplored.

With the deft skill that had come from long experience with such intrusions, Dibbs skimmed the boy’s mind as a poker cheat might shuffle a deck with an eye for aces. He found plenty of ring pops, but nothing worth blackmailing the child over.

He could have run the kid in, or at least given him a stern talking to, but, while it may have saved the shop’s owner a few rubles, Tony couldn’t see the advantage in wasted time and paperwork.

Besides, perhaps one day the kid would really screw up, and then they’d have something worth talking about.

Bending low enough that his shabby gray trenchcoat swept the floor, the policeman stooped to retrieve the heftiest plastic sack of M&Ms he could locate on the shelf. Personally he preferred his candies to be made of beef and in the shape of steaks, but Dibbs knew, as only he could, that his commander had a secret weakness for the candy-coated chocolate. 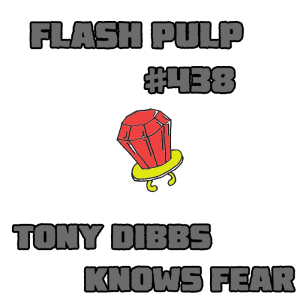 Finally, approaching the counter, the cop’s mind turned to why this particular fellow had been selected to work the night shift. His thick arms spoke to the well-used weight rack his family had kept in their garage. Those same limbs also displayed a history of cheap tattoos left to fade under a relentless sun.

Dibbs knew the name was a lie. He also knew, without having to dig deep, that the man’s eldest brother had been arrested for murdering twin hatchetmen from an opposing gang, and that the act of violence had been but one in a seemingly endless count of cousins and uncles being stabbed, bludgeoned, or buried in secret.

When a boy, the clerk had fought off an attacker till the man’s features were smeared and limp, but it had been the final straw that had pushed him into seeking a new life on the northern side of the border.

Yet, though the minimum wage hulk had brushed elbows with assault and murder, Dibbs was unconcerned.

Like a bear, he knew the man was more afraid of him than vice versa.

“Listen,” Tony said to the supposed Jose, “I forgot my wallet in the car, so you’re going to cover this for me.”

The big man chuckled at the notion until Dibbs asked, “what’s so funny, Francisco Javier?” – then the laughter stopped.

“Who are you?” asked Francisco, his face now taut.

“All you need to know is that I’m a cop, a psychic cop, in fact,” answered Tony, and he waved his ID at such a speed as to back up his point without allowing the clerk a chance to read his name.

Fear flooded the undocumented worker’s mind – fear followed by rage. Yet Dibbs drank it in like a six pack of Coors, knowing full well which emotion would win.

He threw the M&Ms on the counter and added, “I’ll take ten – no, twenty – picks for tonight’s lottery as well.”

Francisco’s hands were trembling slightly, but his voice was smooth and well controlled. “Fine. Any specific numbers, Mr. Psychic?”

They stood in silence until the printing was done and the exchange made, then, scanning the candy, the counterman asked, “how could a cabrón as sweet as you ever need something so sugary?”

“Oh, it’s not for me, I can’t stand ‘em,” replied Dibbs, “they’re for my commander. The best part is that I get brownie points for thinking of him, while at the same time he gets to suffer with the knowledge that his wife has him on a diet he’d rather we not know about.”

In his time as a policeman Tony had found himself in many situations reeking of panic and desperation, but he himself had never been particularly concerned. He did not fear the thieving teen, nor the tattooed foreigner, nor even the metal-pierced bikers who ran the meth trade on the south side of town: To know them, as he thought only he could, was to master them.

From behind came the sound of a throat clearing, and for perhaps the first time in the entirety of his adult life, Dibbs was surprised by another human being.

Turning on a startled heel, the Actual Psychic Cop found himself face to face with what should have been a non-threat: A man of medium height and slight build, his hair a mess, and his black hoodie rumpled.

The stranger took a long draw from the Slurpee in his hand.

No matter how hard Tony strained, there was nothing to be heard of the newcomer’s thoughts, and that’s when the man who had always known everything discovered one fact he was unaware of: This blankness, this void of knowledge where he’d always found an open book, terrified him.

“Who are you?” asked Dibbs, and the question felt foreign on his lips.

“Did you hear that?” announced the stranger, his voice raised, “this fella is a policeman.”

He spoke not to the others at the counter, but the teen who was now quickly emptying his pockets back into a box of Ring Pops.

Satisfied, the hoodie-wearer returned to the business at hand.

“Capital City PD’s supposed psychic, huh?” he asked, “A few of Dad’s chums have mentioned your ‘reputation,’ though it sounds like you’re making enough on the side that you should be able to pay for your own goods, Mr. Dibbs. I’d hate to have to pass on this video I’ve been recording to your superiors. Especially after that crack about the chocolate.”

Seconds later, empty handed, Tony was back in his car. It would not be his last encounter with Mulligan Smith, though few of their future run-ins would end so peacefully.