Tonight we present The Memory Eaters

This week’s episodes are brought to you by The Casebook of Esho St. Claire!

Tonight, we find ourselves not quite alone with our memories in a quiet Capital City apartment.

He’d thought his new home empty, but a rustling among the still-unpacked boxes had been enough to draw him from his bed and along the short hallway. The notion had entered his mind that it was Cassie; that she’d managed to stumble through the lobby’s locked door and had somehow circumvented the deadbolt and chain that held his own front entrance shut tight.

It was not Cassie.

Instead, he’d discovered, rummaging through the cardboard caskets that held his former life, a trio of two-foot-high beasts.

Their bodies were gray, round, and hung with fleshy rolls that reminded Everett of his Aunt Beth’s ancient hairless cat. The invaders, however, stood upon six legs, and a pair of knobby arms hovered over pouched bellies. Their eyes were the size of fists, but it was their mouths – lipless and revealing a jagged row of teeth as long as butter knives – that held Jimmie’s attention.

Two of the intruders were peeling the packing tape that held his memories at bay, while the third left a thick layer of slobber on its barbed fangs as its elastic tongue toured its jaws with anticipation.

“The hell?” asked Jimmie. For a brief second his brain slipped from one impossibility to another, and he assumed he was, in actuality, asleep.

The knot of creatures turned, their tiny clawed hands clapping with enthusiasm.

There was a pause then, as the awake man let the chill beneath his feet and the lingering smell of microwaved popcorn convince him that this was, in fact, reality.

As they watched him process, the trespassers giggled throatily to each other.

Finally, deciding he’d survived too much to allow three still-possibly-hallucinated imps with mange to set him back now, Jimmie straightened his spine and asked, “who are you?”

“Damn, I was hoping to play Chase Him,” said the monstrosity closest to the boxes, and its fingers returned to stripping the restraining bands from Everett’s previous existence.

The apparent leader bobbed on its triple-pair of legs, the bumps of its spine rolling from back to front, and it deposited a sizable hairball on the unswept parquet before saying, “we’re Memory Eaters, and we don’t particularly care what you think about that.”

“Think about what?” asked Jimmie.

“The fact that we’ve arrived to devour your history.”

The second of the beasts, caught between its talkative companion and the impending pillaging of picture frames, albums, and dusty knick knacks, turned to pick up the thread.

“It’s pretty clear from the name: We eat your past. Can’t quite summon the face of your dead father? We probably ate it. Difficulty bringing to mind the sound of your grandmother’s voice? We ate that too.”

Jimmie blinked, his brow furrowing. “You think Gran’s voice is in that box somewhere?”

Again the chorus of chuckles rose to his ears.

“No, but it gets us closer to a full belly when we can chew on your family photos and beloved teddy bears,” replied the leader. “Frankly, you’ve probably heard of us before. Most have, as a schoolyard urban legend or bedtime fairy tale, but simply don’t remember because we later crossed paths.” 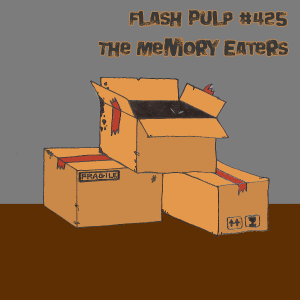 Watching the last of the tape pull away, the second said, “whatever yesterdays you’ve tried to pack away in there must be pretty ripe, people generally only notice us if we’re pulling at the most solidly planted memories.”

“Great, now he gets to play Chase Us!” said the unpacker, its voice high with excitement.

“Look pal,” interjected the leader, “normally I’m all for the fun and games, but we’re on a tight schedule tonight. There’s three of us and one of you. I promise you this: We always win in the end. We may be in a rush, but, really, time is always on our side.”

It was then that Everett recollected that the Millennium Falcon playset his father had given him when he was twelve was not amongst the living room collection, but was instead tucked in a suitcase at the back of his bedroom closet.

Standing there, amidst the assault on his largely barren living room, he thought suddenly of the leather couch he and Cassie had selected together, their first real piece of jointly owned furniture. He thought of how they’d sprawled on it, her head in his lap while she whispered every promise he’d ever wanted to hear.

He thought of later finding her there sleeping, his shoulders aching from the stress of work, and the stink of spilled booze wafting through the air.

He thought of the arguments that followed; of missing money; of broken promises.

Turning away even as the hanging rolls of the Memory Eaters’ bellies began to fill out with the broken China and cracked-framed wedding pictures that were his half of the divorce, he said, “some memories are easier to give up than others. Watch your gums on any stray whiskey bottles – and keep it down, I’ve got a job interview in the morning.”

Once he reached his room he shut the door behind him, and when he awoke he could no longer recall what had so troubled his sleep the night before.