It was chill as Coffin stepped onto his balcony, and the leaf husks of the philodendron that Bunny had attempted to grow, a month earlier, rattled in the wind.

Had he been neglectful in not making more appearances? No, he told himself, he’d simply been busy – but, then, Sandy had also been busy once.

His dead wife, on the pavement eighteen floors below, grunted.

Rolling his shoulders, Will asked, “how’s the afterlife?”

There was a long pause before Sandy’s shattered jaw murmured, “you always were terrible at small talk,” into the unyielding cement.

“Must be going well if you’re not even trying to murder me,” he replied.

Silence, then, “you’re not worth the effort,”

“Huh,” said Will, but he couldn’t help but crack a smile. There were many reasons to fear Sandy’s apparition, but her skill at delivering the cold shoulder was not one of them.

Coffin leaned over the railing. She could have heard him whisper, even at that height, and the slab walls and platform of the balcony echoed with her every crush-lunged breath. Nonetheless, he squinted through the bitter wind to make out her twisted form.

He counted a dozen skipping inhalations, and a dozen moist and whistling exhalations, before she gave up her hush.

At another time he probably would have just invented something. The matters he conveyed were trivial at best: He could easily fake calls on the two birthdays he’d missed and stitch those falsehoods with the same old arguments Sandy’s family were constantly re-chewing – but he didn’t.

Things were changing. She’d always been so sure when she’d worn the jacket and held the chain, and he envied it.

He knew, however, that her certainty had also been her downfall. 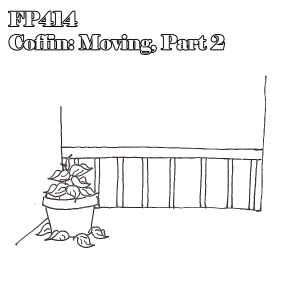 “I’ve been too busy to call around. I’m sorry,” he said. It was a vague sort of statement, and intentionally so.

With the dragging effort of a winded marathoner, Sandy’s left arm, the bones at her wrist projecting through her torn skin, rose, and her palm set its heel firmly on the pavement. She began to drag her motionless legs towards the apartment block’s foundation.

“Too occupied with your new sidekick?” she asked.

“The ogre’s amok out west, the city seems to be overrun with Kar’Wickians, and someone’s dispatching ghosts without my assistance.”

“Which one am I supposed to be able to help with?” she asked, as the fingernails of her right hand came loose on a particularly jagged ridge of mason work. Yet still she climbed.

“None,” he answered, and, as she scaled the second through fifth floor, he recapped his encounter with Laila Hamilton.

When he’d completed his recitation, she asked, “didn’t you say there were Kar’Wickians in the city?”

“Didn’t you say the ogre was up and the dead were going missing?”

“Why are you working this thing then?”

It was his turn to fall quiet.

At the twelfth floor he changed the subject.

“You understand what I need then?”

“Yeah,” replied Sandy, not stopping in her attempt to scale the building and murder her former husband.

“So you’ve said,” she replied.

“So you’ve said,” she repeated.

With a gap where her front teeth should have been, she bit her lip, then continued. “Don’t get weak kneed now, you put that jacket on yourself. If you were going to start second guessing I would’ve appreciated if it happened before I landed.

“Will, if you can’t handle this business pass it on and join me at the bottom.”

There was a pause then, and suddenly her ascent stopped. Her decades-old plunge played itself back at triple speed, and she once again returned to her place of rest.

“Go buy some belated birthday cards and I’ll ask around,” she concluded.

He turned, eagerly pawing at the sliding screen with chilled fingers.