Tonight, we return to our tale of arcane murder and questionable dinner parties as Will Coffin, urban shaman, and Bunny, his apprentice, travel northward.

Perhaps the proximity to death reminded their driver, the last crew member of the Phantom Ambulance, of his own recently lost companion, or perhaps the phantasm kept to himself to prevent exposing the strings of saliva entwining amongst the spiraling teeth beneath his paramedic’s face mask. He could not help the desire, even if the carrion that might be his meal was forbidden.

Whatever the case, Bunny was happy the ring-mouthed chauffeur wasn’t feeling conversational.

The procession’s first stop was a short one, but, as Will explained it, still a diplomatic necessity. Wide Eye, the animal lord who held sway over the lands to the north of Capital City, was a ruler in decline, with his presence barely felt in his realm even in those days of growing power – yet, after a moment of silence over the corpse, the massive golden-pupiled owl had extended the smaller set of its four gray wings to summon a brown mass of rats bearing upon their backs a proper casket in which to lay the visiting dignitary’s remains.

The box was made of simple wood bound together with tree-bark twine, but the lumber – a collection of driftwood, ancient and splintered downed maple, and fragrant fresh pine – had been etched and shaped by a multitude of beaks and claws. A single shard no bigger than Coffin’s thumb might hold a magpie’s pattern intricate enough to be mistaken for Victorian wallpaper, while other slabs held delicate spirals dug by chittering and weeping squirrels. The only gap in the construction looked upon Pisky’s shadowed face, and in that poor light it now almost appeared as if the raccoon had found some peace.

Coffin had spent his brief time outside the surrogate hearse making insistent phone calls that otherwise would have felt inappropriate in the sanctified hush of their catafalque, but, two hours later, he finally broke the rattling quiet of the ambulance’s steady highway pace. 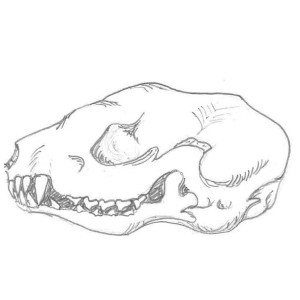 “I remember one time – in the mid-’80s I guess – when this woman came to us for help. Francine. She was a nice lady; big hair, heart, and hips. She was having issues with her husband, who she was sure was possessed.

“She was the sort to keep to herself, but he was the type that liked to roam downtown with the boys while wearing the too-tight pants of the era. On three or four occasions he’d woken her in the middle of the night. Once he was jabbering in a language she couldn’t understand, the next he was going through some sort of naked ritual dance in the living room.

“Sandy asked around, but none of the dead folks had heard anything. We were starting to wonder if another magic peddler was moving in on our territory, so we began taking turns following him in the evening.

“She figured what was going on on his second outing and set the trap.

“It was a fairly simple thing – he was heading into Mierau Park, off of Fifth, and it was as shady then as it is now. He must have just done another bump of coke, or whatever he’d bought, when he came down the last stretch of sidewalk to the subway.

“He was be-bopping to himself, his shoulders swaggering, and suddenly there was a five-foot-tall talking raccoon in a full tuxedo – Pisky insisted on the tux – demanding everything in his pockets.

“You’ve got to picture it, the guy was deep in Don Johnson territory: sport coat, pastel shirt, white guy Jheri curl, the whole thing. He pulled out a big baggy of suspicious powder, a wallet fat with the bills he planned on blowing that night, and a ring of keys, but Pisky didn’t even blink, he simply tossed it all in the air and ate the whole collection.

“Well, Francine’s fella wet his pleated teal trousers and ran. Far as I know he gave up his weekend ways.

“Pisky, though, spent the next two days raving about ants.”

Bunny shifted on the bench opposite and did her best to chuckle, but her mind was weighing the murder of a being that had lived hundreds of years.