Tonight, Joe Monk, the last human and one day ruler of known space, finds himself in a seedy bar on the backwater world of Mengi.

Joe Monk, the man who would one day be Emperor, Macbeth, his craboid counselor, and the small fleet of interstellar craft that had begun to trail their roaming egg of a ship, had landed on Mengi as part of a PR tour on behalf of the Council of Ten Stars. The Council had funded the expedition as an educational venture. It was their hope that the novelty of seeing the last example of a dying breed would hold their youths attention long enough for the man’s simple but altruistic view of the universe to take root in their obviously increasingly degenerate neural networks.

In truth, however, the circuit was as educational for Joe himself as it was for any of the smart-mouthed adolescents who attended his rambling Q&A sessions, though much of his studies took place in the sort of low-cost fermentation dispensaries that grease the grind of a tight travel schedule.

His brief stint as lawman had brought Monk into contact with a dozen races, but the metropolitan worlds of the Ten Stars were awash in shape and colour. He was finding it difficult to keep personal identifiers separate from species names, and more than once a mottled green mouth or purple-furred set of ears had descended at his unintended bigotry.

Still, he had no trouble telling Asbelene and Oshkosa apart, and the fact that they were Krebbles, from the thickly populated jungle planet of Kerees, was very clear in his mind.

They’d told him so when they’d introduced themselves, but the Krebbles reputation was well known.

The vaulted ceilings of the orange-walled bar were lit in a low spectrum so as to be friendly to even the largest eyed patron, but to Joe’s thinking it was as if the night had flooded the room and brought with it the thick booze and high-nosed spices that filled Mengi’s tourist market.

Monk and Macbeth had seen and drank as much of the planet as they could manage, and the earthman had promised the unmarked establishment would be their final stop.

Still, he’d made the promise some two hours earlier.

As their conversation had progressed, Asbelene’s stool had slowly travelled around the bend of their round table. She’d first introduced herself while offering a gloved appendage wrapped in the deep shade of purple that covered her form in a velveteen crush of robes and veil. She knew all about his story, she’d said. She’d seen it on the NewsNets. What a romantic notion, the last of an entire race – but what a sad and lonely one, she’d added.

Monk had only been able to agree. Eventually, however, he tired of talking about himself.

“Been on Mengi long?” he asked.

“Quite a while,” replied Asbelene, “we can’t all hop around in our own ship you know. Besides, it’s warm here and the sun lingers. What more could you ask for?”

She lifted back the light veil that covered her brow to reveal a pair of human eyes. They were the same shade of purple as her garb. Joe couldn’t recall reading any books in the egg’s library in which a character had violet eyes. 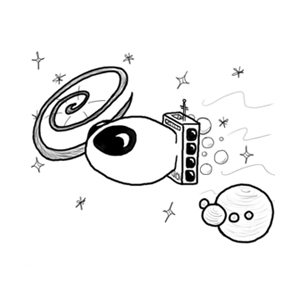 “Oh,” said Joe, “the nomadic lifestyle has its advantages. There are a lot of gorgeous sights I wouldn’t have had a chance to see otherwise. You’re right though, it can be lonely. The scenery doesn’t change much between stops and I find it hard to sleep when I don’t have the thrum of the engines in my ears.”

“The people who built my rocket pony had to guess at how big I’d get, so I’ve got room enough for two of me – actually, it may sound ridiculous, but my bed honestly is built for high G maneuvers and sudden impacts.”

Her robes shifted slightly right and she let out a distinctly human giggle.

Excusing herself, Asbelene stood and retreated to one of the personal sanitation rooms nestled in the shadows at the rear of the tavern.

With her purple figure briefly out of view, Joe remembered that he’d arrived with Macbeth. Optimistic at the likelihood of his companion’s own enthusiasm, Monk turned.

Macbeth was not smiling.

Neither was his conversation partner, Oshkosa.

Finally having caught the earthman’s attention, both of the self-appointed mentor’s eyestalks stiffened, and he hooked his large right claw across his shoulder.

“Can I talk to you over there?” he asked.

Joe couldn’t see much of anything but decorative pottery in the corner, but he knew it wasn’t really a question.

Once out of Oshkosa’s earshot, Macbeth immediately took to whispered yelling.

“Do you understand what these girls are!?”

“Krebbles,” replied Macbeth, dropping the word heavily, as if it were the only response he required.

Macbeth sighed a fermented sigh and nodded, but he still required assurance. “Okay?”

Monk did his best to give it. “Okay.”

Before he’d finished the sentence, Macbeth was already digging in his satchel for a method of payment that was actually valid in the establishment.

“Uh, you can head back if you like,” said Joe, “I think I’m going to spend a little more time getting to know Asbelene.”

The pseudo-crustacean dropped his bag.

“The Krebble? Do – do you know what their disgusting genetic imperatives drive them to do? They start as piles of formless goo! Goo! Then they steal your DNA! That’s what she was doing when she first shook your hand you know – but that’s not even the worst of it!

“She’s shedding under there. Her gooey, lusty, flesh is drying and flaking, and soon she’ll shed her current shape like a cocoon. She could be in there right now doing it! She simply wants to make herself appear to be a viable mate so she can plunder your breeding juices!

“These filthy Krebbles are built to endlessly evolve their reproductive systems by sucking down the seed of others! She’ll seem the perfect mating partner – rounded in all the ways you like, cooing in just the way you idiot monkeys enjoy – but they’re nothing but masquerading eugenic harlots.

“You. Idiot. Do you not understand what I’m saying?”

“You’re saying I’m in danger of having Asbelene be exactly what I’d want in a sexual partner, and perhaps, uh, misplacing my genetic heritage?”

“That sounds suspiciously racist, but we’ll talk about it back at the ship – say in the kitchen, around breakfast time tomorrow? That’s when I’ll be back.”

With that, he turned.

It would be only another hour before the last man would see his first womanly form.

He was late for breakfast.