Tonight, we take you to war through the ears of three men.

Annan missed the fire back at the camp.

Things hadn’t seemed so bad when he’d been able to close his eyes and pretend its warmth was that of his own home’s hearth. He could almost convince himself that Newlyn’s lippy snoring, across the timbers, was actually his father’s familiar burr.

Now, at the edge of this soon to be bloody field, there was no room for illusion. There was only dew-damp feet and fear.

Newlyn elbowed him with a grin. The idiot had heard the same rumours about the Romans’ supposed new suits of iron, yet he’d slept like it were a feast night.

“It’s like my mother always said, if you’ve got to die it’s best you do it for reasons you but vaguely understand and on ground you’ve never seen before. No one builds a legend around your name for defending your sister’s honour outside your front door.”

With a sigh, Annan simply raised his instrument to his lips.

He really hadn’t even wanted to join the army, he’d only done it for the music.

From the treeline across the grassy plain, a high and sweet blast of brass carried to his ears.

This was not proper accompaniment for battle – this was the shrill shrieking of children.

The response was obvious.

He raised his long stemmed wolf headed horn, and its bleating was low and mournful and filled with death.

“Tell a man to march twenty miles and he’ll groan. Make him do it with a pipe and drum at their back and they’ll arrive with their toes tapping,” Abner was saying.

It was meant as a compliment, but it was too close to what Theodore had been thinking on even as his arms had kept at their motions.

Raising his water skin to his mouth, he cast a look towards how much attention Rorke, the man nearest their chosen resting spot, was paying to their discussion.

Deciding the private was far more interested in a brief nap, Theodore leaned close to Abner’s ear and said, “when I first arrived here, before the call to arms, I took some whiskey and followed a local bush clearer to the plot of swamp he’d briefly rented to Cherokee – quite possibly the very same we now hunt.

“I’ve heard their drumming. I’ve seen their dancing. I am not sure there is as much separating us as we tell ourselves to justify this march.”

The conversation ended there. If music had been their ally, then silence had been their enemy’s, and a sentry’s dying screams marked the point at which the two met.

Despite the surprise attack the line formed with the practiced speed of men long far from home, and Abner was soon carrying a staccato across his hide.

His tempo, though ever maddening, was paced by the crack and roll of firing muskets.

It was the sort of day that left Everett glad he worked in an air conditioned box.

He was sure no one was meant to live in Nevada in July, but the pay was good.

“They’re in the next room,” he was murmuring into his headset. He couldn’t help but whisper as if the turbaned men on the far side of his computer monitor might hear. “We could hit the building with a couple hundred pound chunk of sky, but they’ve built a daycare two floors down that’ll wipe out any happy headlines we get from killing so many at once.”

“Yeah, yeah,” came the reply, “I hear you. You’re due for a break in twenty, you sure you’re not tired? I could take over.”

Everett chuckled. “Uh huh. I’ll have this cleared in ten, but I’d do this on unpaid overtime if I had to – I ain’t letting you run off with my points on the big board. This month’s Starbucks gift certificate is all mine.”

“Fine, go hot with just the onboard pop guns, but remember that this isn’t a Call of Duty level, and don’t forget to log your brief before you wander off to the break room to bump your score and brag.”

Hearing the line go dead, the technician smiled to himself and pulled up the operating system window that contained his audioplayer.

As he sent the command to disengage safeties, Bangarang, a classic Skrillex tune, hit his ears.

Fire through the wall or slide over to the open door?

Everett was considering simply doing both when his view began to shake. His first thought was that someone had grabbed ahold of the quadrotor platform, but he soon realized that the drone was maintaining its position – it was everything else that was moving around it. 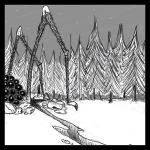 “Earthquake?” he asked his empty cubicle.

Though he couldn’t hear it over the bass, the air conditioner answered with its same old tune, at least until the quaking truly began.

Though, in a panic, he repeatedly posed the question to his empty headphones, Everett could not rectify how the disturbance on his viewscreen, thousands of miles away, related to the slamming and bucking of his cargo-container office – and, afterwards, he would not care, for the beat and thrum that had prepared his blood for battle was not unlike the rise and falls of a thrashing victim upon a spider’s web.

Within moments all was made clear, as the Arachnid Lord’s appetite was without end, and Kar’Wick’s hunger, announced by a new rhythm driven into the very earth, would not be denied.