This week’s episodes are brought to you by Talk Nerdy 2 Me!

Tonight we present a Halloween tale of household haunting and chronic insomnia.

Dwight’s first warning came while sneaking into his son’s room to deposit a freshly folded pile of underpants into his bright yellow dresser.

Fluttering eyelids gave the boy away.

“Are you awake, Boop?” he asked Yoshi.

Dwight nodded as he laid-out laundry by the glow of a Winnie the Pooh night light. “At least you didn’t try to lay a fake snore on me. Why are you up though?”

The four-year-old rolled to face the wall before answering, “I never sleep. I just pretend to make you happy.”

Hiding his chuckle with an honest yawn, Dwight smiled.

“Well – make me happy by not pretending and actually going to sleep.”

“I’m waiting for Mum to get home.”

Long practiced in the art of altering the flow of conversation around any mention of the woman, Dwight simply said goodnight and left.

The next day, well after midnight, Dwight was sternly shutting the door.

“I’m not playing anymore. Go to sleep,” he told the flat white expanse that doubled as a finger-painted art gallery.

After their brief discussion, the previous evening, Dwight had curled up for some much needed rest, but his slumber had been interrupted at dawn by a pressing request from his bladder. Finally stirring from a tedious dream, he readied himself for a quick run across the washroom’s cold floor and back, then turned over.

Any thought of returning to sleep had been wiped out by the sudden discovery that a form was hunkered on his bed, not three inches from his face.

He’d let fly with a rare “Christ!” but Yoshi had only laughed.

To the father’s mind the problem was that the tyke had started to consider the situation as a game. Still, shouldn’t sheer exhaustion have done him in at some point?

He paced the short hallway for twenty minutes, then, when all seemed silent and he could no longer lift his legs to maintain his gait, he headed for bed.

Lying alone in the darkness, however, Dwight began to wonder if it were actually a case closer to noticing the arrow in the FedEx logo. Could he have missed that Boop was faking? Had he really always been pretending?

He was still paying down the bill’s for Mamiko’s treatment, he couldn’t afford to have the boy in for a sleep study.

Damn foolish was what it was. The child just needed to shut his eyes.

Friday, at two in the morning, a commercial for car alarms brought Dwight out of an unexpected couch nap.

Even as he stood, his knees popping, the sound of Yoshi’s moaning reached his ears from the far end of the bungalow.

As he stiffly walked the hallway the evidence trail was obvious to read. The closet they’d designated a pantry, just off the kitchen, was ajar, and a trail of stray Fruit Loops led him on.

Once he could, Yoshi, through tears, said, “I was hungry.”

It was nearly dawn by the time Dwight cleared the smell of stomach acid and artificial flavours from the room.

Drifting, only half conscious, through work and dinner, Dwight had fallen asleep midway through an explanation to his son that his mother, now dead nearly a year, was not coming home.

Generally such a sensitive discussion would have had the father’s full attention, but into the second hour of alternating between telling the boy to sleep and explaining why his naive logic was wrong, he’d sat down on the thinning blue carpet and rested his head on his hand.

Now, at 3am, Yoshi had startled him awake with the tumbling of a pot-and-pan tower.

Crawling into the boy’s undersized bed, the father wrapped his arms around his son and held him.

It was not a calm slumber, though, as every movement roused the vigilant parent – and Yoshi could not cease his childish wiggles.

Dwight was so taut with fatigue the next night that he was barely aware something was amiss before his eyes began to sting with tears. 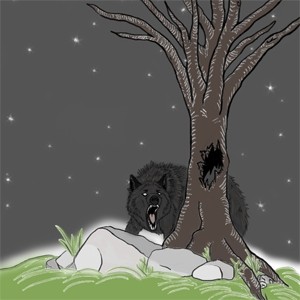 Staggering to the kitchen he found the latest calamity.

Yoshi had pulled his trike in from the rain and dirt of the backyard and created a mud track surrounding the kitchen table. The venetian blinds were blowing in the wind of the open sliding door, and water had begun to pool on the simple black carpet Mamiko had chosen for the threshold.

Worse, the youth had marked the edges of his course by burying the contents of the family knife block, tip first, into the linoleum floor.

The unending emergency was too much. Dwight’s exhaustion had been snowballing, in truth, from the moment of Mamiko’s diagnosis.

An odd thought came to him: She must be so rested – yes, so rested.

It became clear then: All he had to do was wait for her arrival. Things would be better when she got home.

The thought lifted the weight from his shoulders and cleansed the ache from his mind.

Yes, he too would wait up for her.

Gaining his feet, he asked Yoshi to move his Big wheel outside and headed for a mop.

There was a lot to do before she came home.